Sometimes we can fall into our own mind's trap, and we make decisions that can go completely wrong. And we don't even realize it. Sometimes such decisions are harmless, but some of them can lead to bad consequences.

Today Bhaskar Health is going to tell you about these very traps. Read on, and never let your mind fool you. 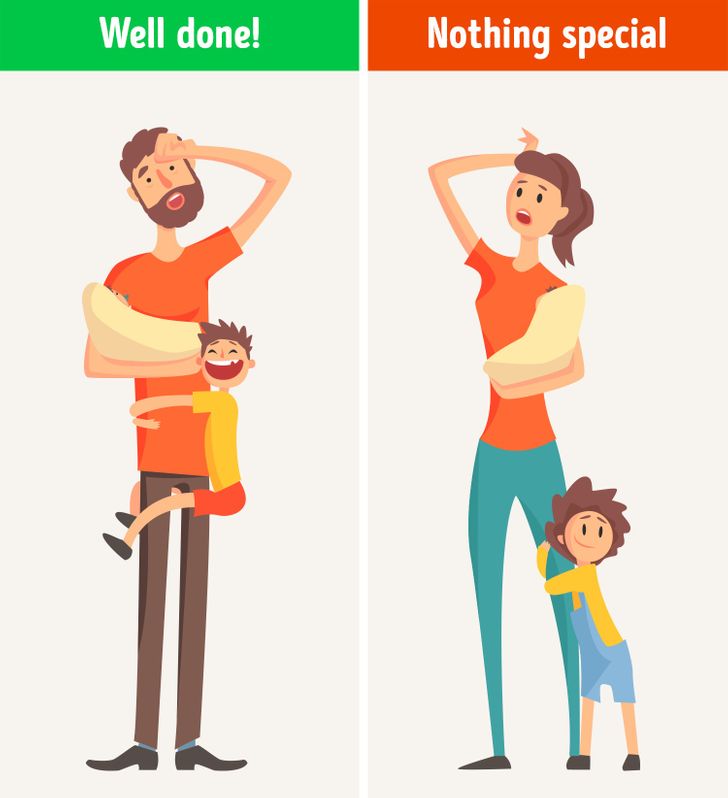 We often try to explain other people's behavior with the help of such arguments as life troubles and problems. But when we justify our mistakes, we use circumstances that don't depend on us. Such mistakes sometimes make us think that we all have similar lives, and that's why it's easy to blame the people around us.

13. A dispute for the sake of victory 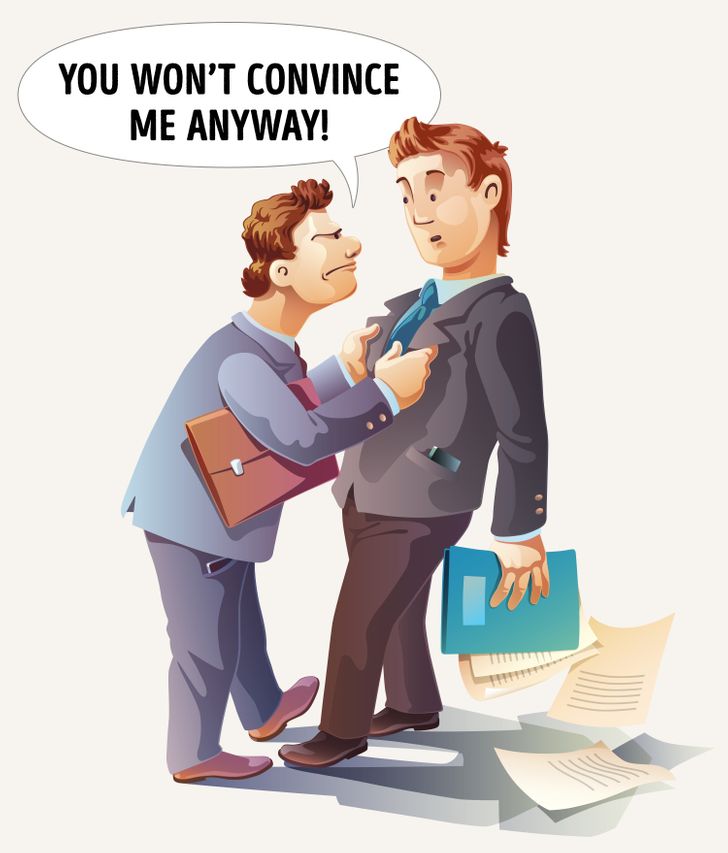 Scientists Hugo Mercier and Dan Sperber proposed a theory that claims people have learned how to argue so as to have an opportunity to influence each other. Modern society also depends on it, which is why people can't stop disputing even if they've run out of arguments. In ancient times, to lose a debate meant to reduce your chance to live. That's why we always argue until the end. 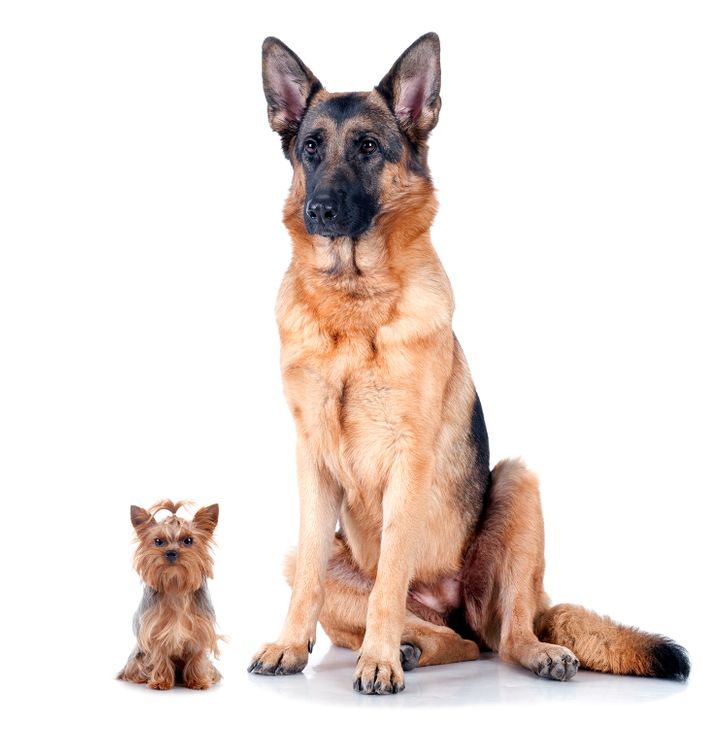 We often compare things that are totally incomparable, and that's why a causal relationship becomes disrupted. For example, there is a belief that the bigger a dog is, the angrier it becomes. But let's agree that a dog's size doesn't affect its character or behavior.

11. Trusting only "your" people 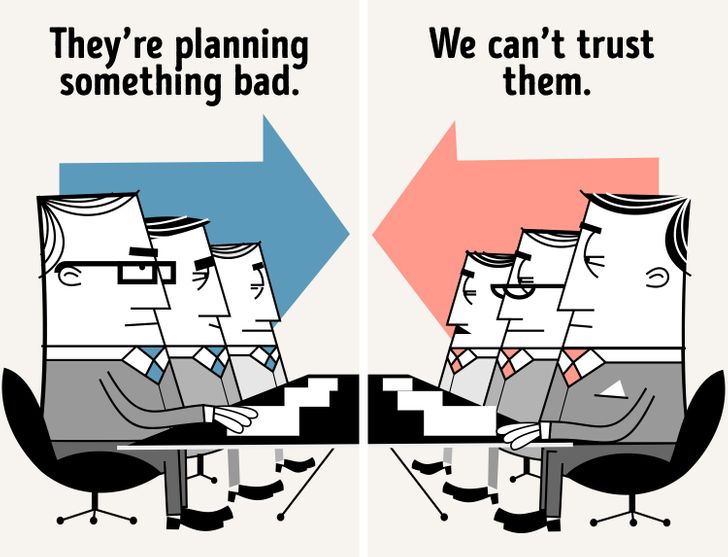 Since ancient times, we wittingly or unwittingly divide people into groups. We trust the people who are in "our" group more: friends and colleagues, for example. And we trust the people who are outside of this group less, treating them with caution and suspicion. This phenomenon is called "in-group favoritism": people overstate "their" group's value and its members' abilities and underestimate those they don't know well. 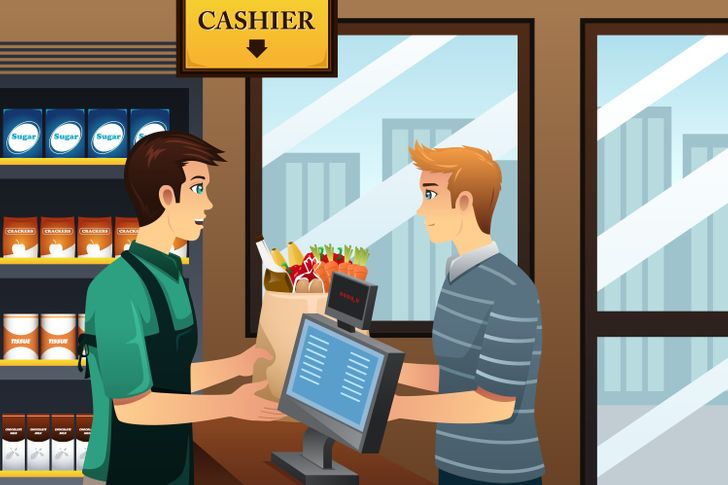 If you think that one thing that turned out to be true once will be true again on another occasion, you've fallen into a trap. If a random cashier cheated you, it doesn't mean that each cashier is going to shortchange you.

9. The majority can't be wrong. 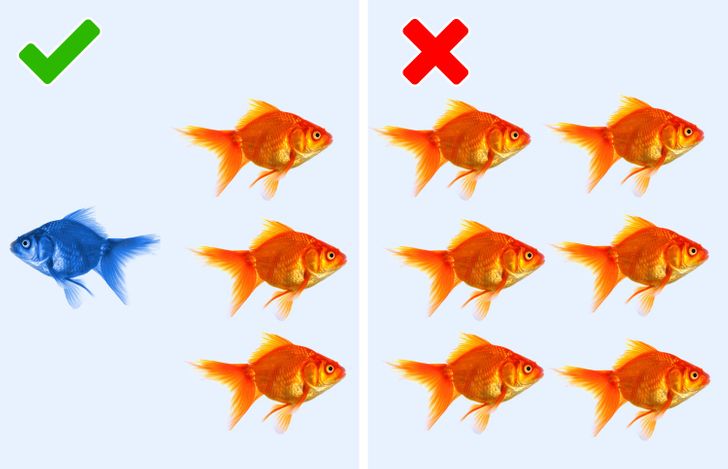 People are inclined to believe something if they know that someone else already believes it. That's how generally accepted rules that are treated as normal inside a group appear. A person's tendency to accept a group's opinion is the reason why we should treat statistical data critically.

8. We remember only our best traits and actions. 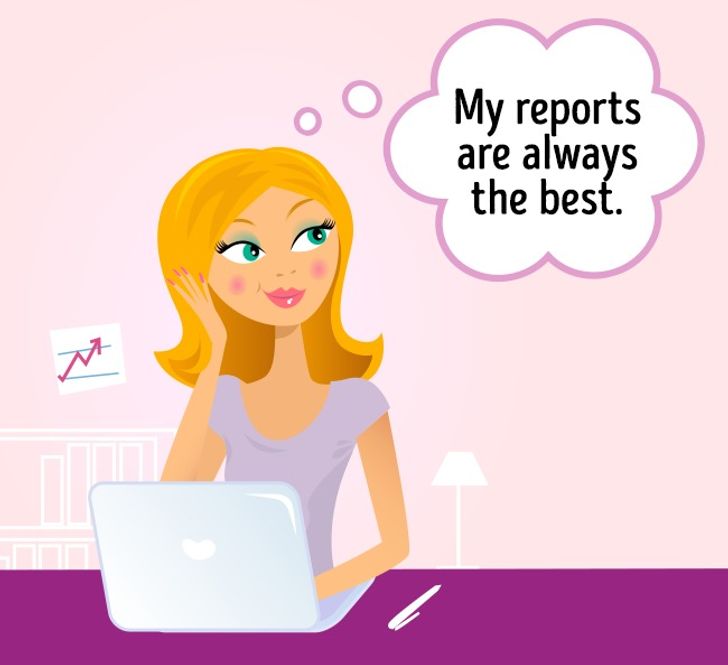 People will be people. Almost every person remembers only their best features. Sometimes we even have a tendency to exaggerate, but we don't notice it. Daniel Kahneman, a Nobel Prize winner, said, "It's surprising how rarely people change their opinion. What is more, when they do that, they don't even understand that. Changing their opinion, many people correct their previous mindset by trying to persuade themselves that they've always thought that way."

7. Our brain thinks that we are different people in the future. 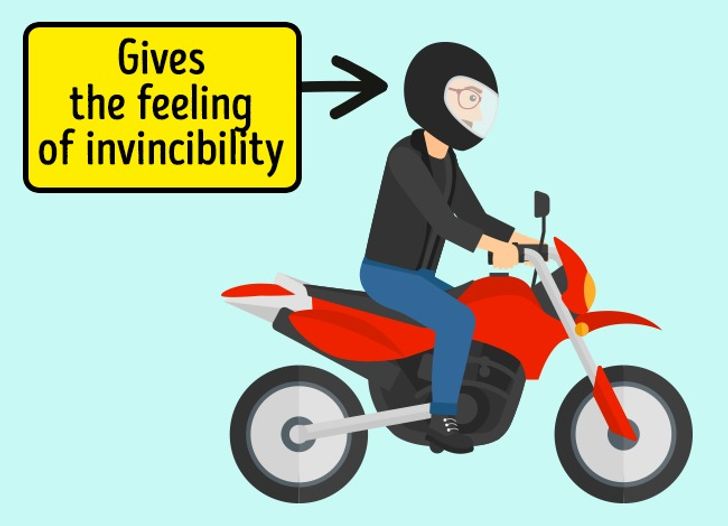 The idea of this effect is that an abundance of different protective devices and safety instructions leads to the feeling that a person is invincible — and the risk of an accident increases. For example, if we take away a motorcyclist's helmet or another piece of equipment, they'll ride much more safely than if they were fully equipped. 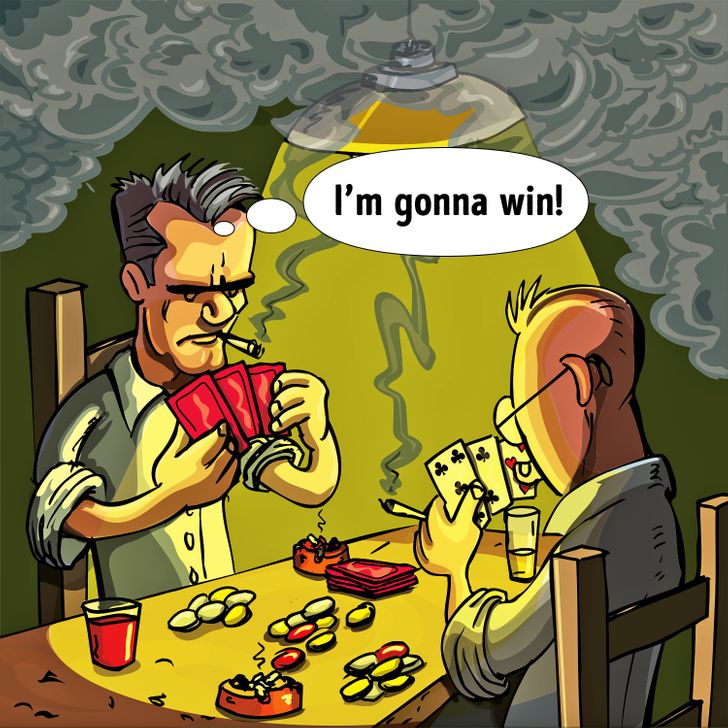 Such a trap is common among people who like to gamble: they're sure that after a series of fails, their good luck will appear, and the next game's going to bring a great prize. Misconceptions about lucky streaks work in the same way. 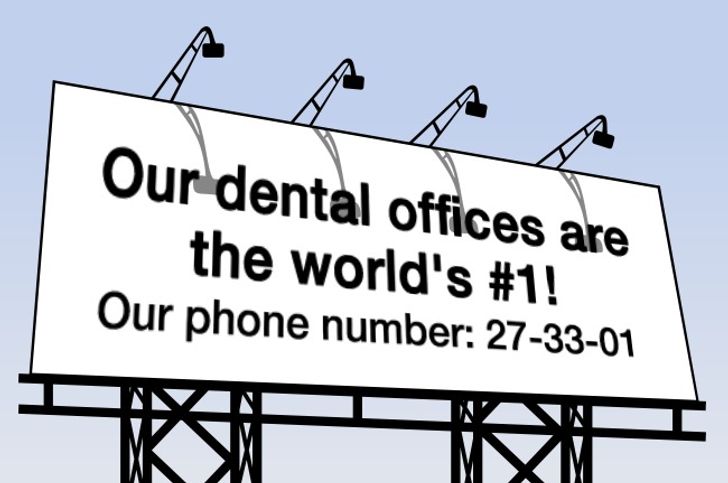 When people see rhyming slogans, they treat them as more trustworthy. These phrases "stick" to us. That's why companies often use such methods to make their goods and services recognizable and their ads memorable.

3. There is always more bad news. 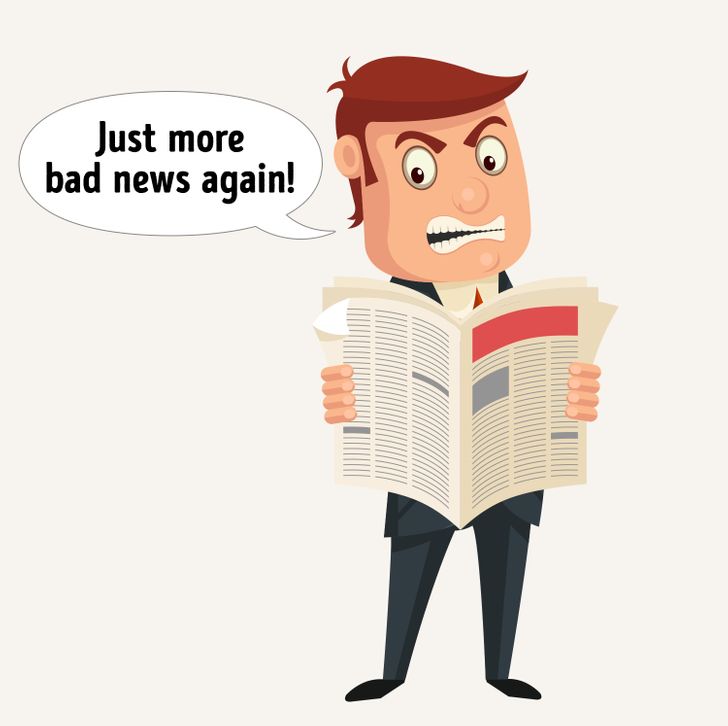 People tend to notice bad news, and it's not a sort of deviation. Scientists think that we subconsciously treat bad news as more important. Moreover, bad news causes more trust: it may happen because the good news seems to be too suspicious and not so interesting. 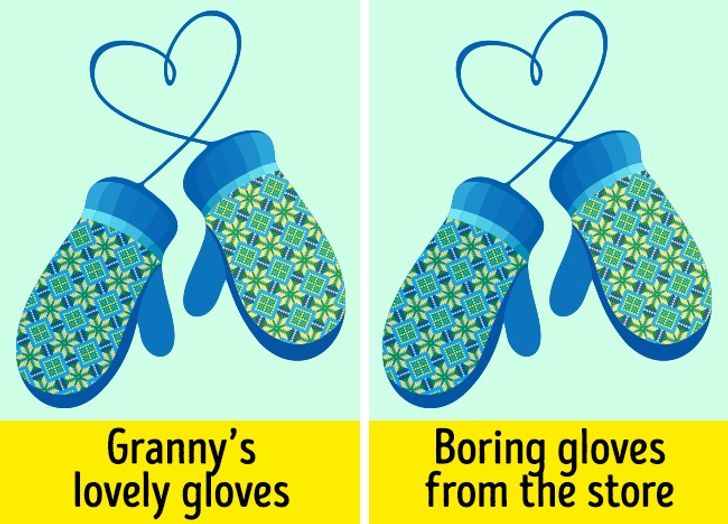 We always treat ordinary gloves or mittens knitted by Granny with a warm smile, though we wouldn't notice them at a store. It's a great example that is called the IKEA effect. It means that we often highly appreciate an item's value if it's related to us, our relatives, or our friends.

1. The "superiority over others" trap 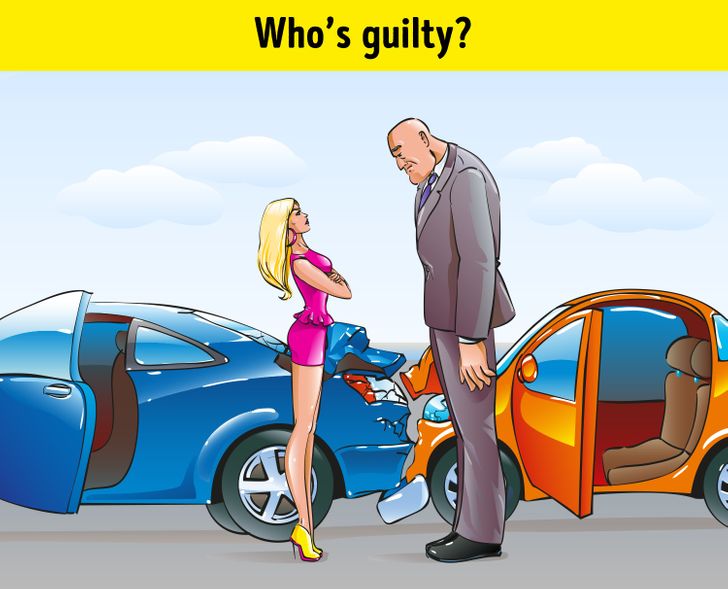 During one experiment, people who drive a car were invited to compare their driving skills to other drivers' skills. Almost all of the experiment's participants thought their skills were "above average." In most cases, people have a high opinion of their skills. They overestimate their abilities and skill level, which is why they can't rate themselves objectively.

How can you avoid such traps? Try to reduce the influence of stereotypes, and never confuse your own feelings with what the world tries to impose. How do you try to cope with such mental tricks?