Small details define us in many ways. For example, in some countries, it’s common to eat while watching TV while in other countries, eating requires a total state of awareness. And in countries like Greece or Turkey, it’s strictly forbidden to flush toilet paper. We hardly think about these things because we find them so common, but as it turns out, we might have been doing everyday tasks wrong all this time.

Check out the rest of these common things Bhaskar Health compiled for you that you might have been doing wrong without even noticing.

1. Chugging a glass of water after a big meal 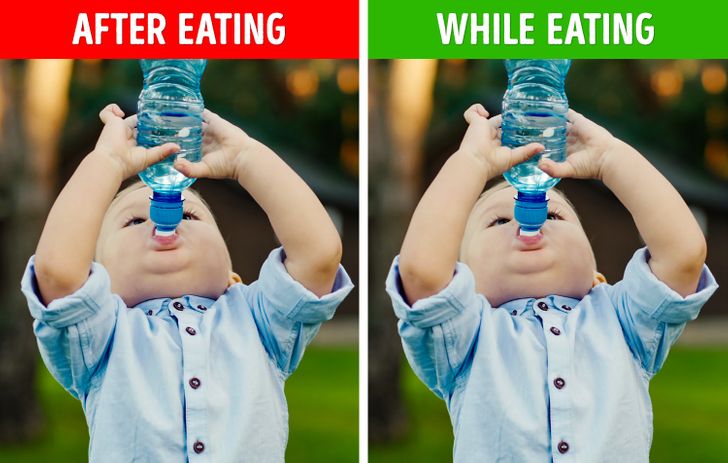 Although the popular theory that water dilutes gastric juices is a myth, chugging a glass of water might not be the best idea, especially after having a big meal. It’s true that water can help you lose weight as it makes you feel less hungry, but after a big meal, gulping down a glass of water can result in a heavy bloated feeling. Drinking water slowly can also help you avoid gassiness and burping caused by swallowing air when gulping. 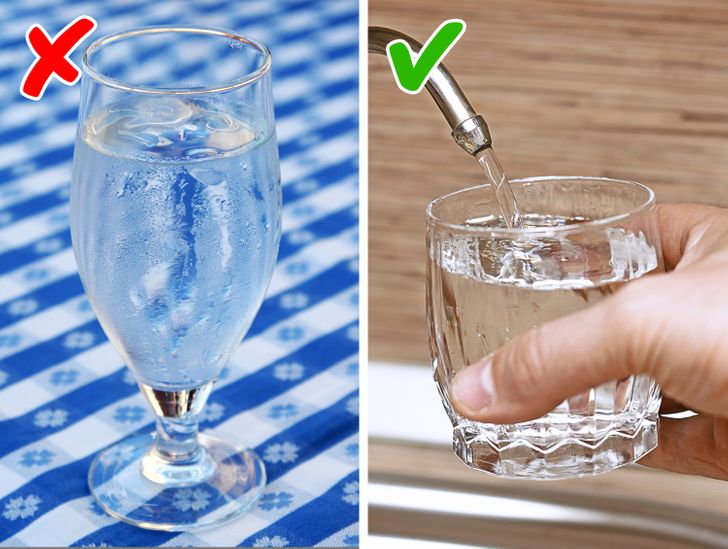 Drinking water might be the most natural thing in the world, and of course, a cold glass of the stuff is so refreshing during the summer, so how bad could it be? But according to a study, drinking cold water worsened symptoms of digestive problems such as achalasia. Although cold water won’t make you sick, it could constrict your blood vessels.

3. Storing tomatoes in the fridge 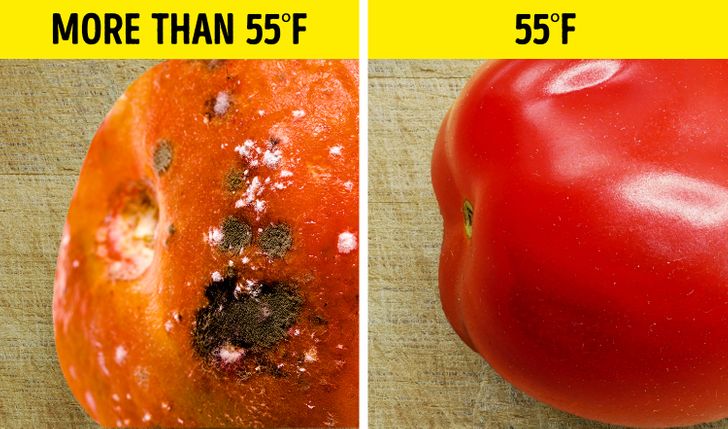 It’s the age-old question: should you keep tomatoes in the fridge or on the countertop? This depends on how ripe your tomatoes are. But ideally, you should do both. Its ideal storage temperature is around 55ºF. Although the fridge will prevent ripe tomatoes from developing mold because most fridges are set at 35ºF, ripe tomatoes will lose flavor. Fortunately, letting your ripe tomatoes rest for a couple of days on the countertop after refrigerating them will give them their flavor back.

4. Washing your face with freezing cold or very hot water 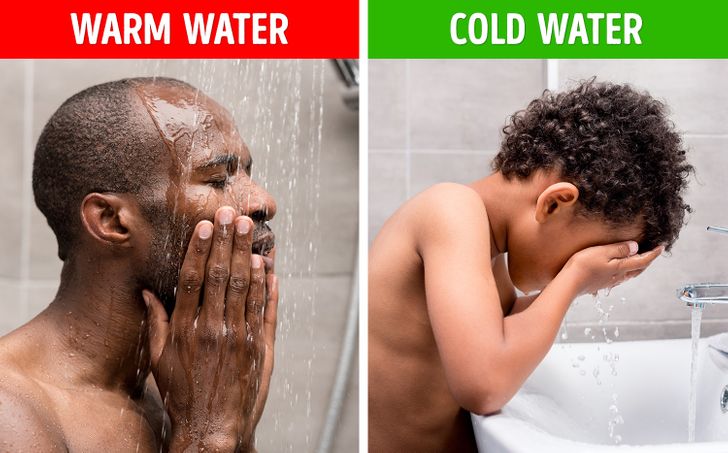 Although it might seem handy to wash your face while showering, if you shower with warm water, this could potentially be counterproductive. On the one hand, it might make your skin produce more oil to compensate and ultimately make it dry. The best way to wash your face is with lukewarm or even cold water after showering as it will make the puffiness go away.

5. Flushing with the lid off 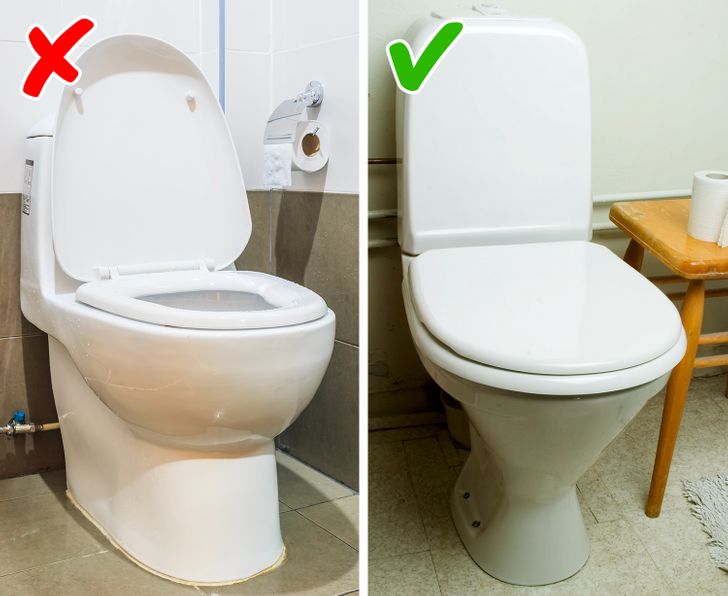 Such a simple thing as flushing with the lid down could have a dramatic impact on your health. Every time you flush it’s basically as if your toilet was sneezing (experts call it toilet plume). Since bacteria can be hurled up to 10 inches above the toilet when flushing with the lid off, even your toothbrush is at risk of catching splashes of fecal matter.

6. Not storing herbs according to their type 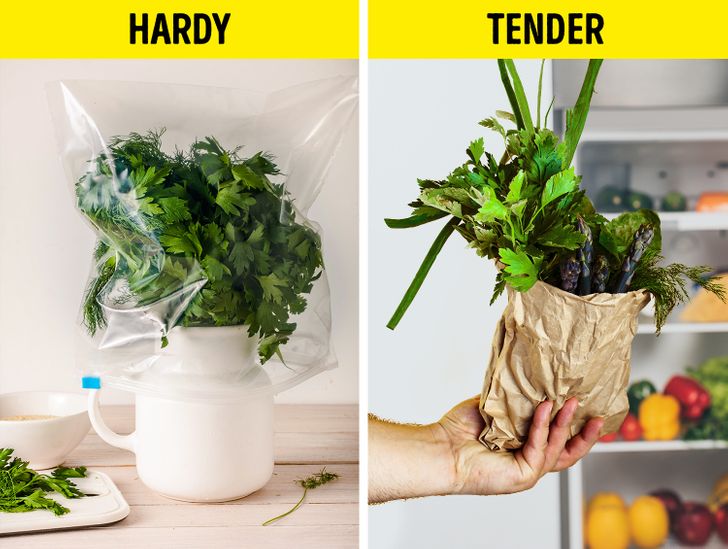 If you thought all fresh herbs should be stored the same way, it turns out it’s a bit more complicated than that. Hardy herbs (like oregano, rosemary, thyme, etc.) are better preserved in a jar with their stems in water. You can opt to store the jar in the fridge. However tender herbs such as cilantro, parsley, celery (stalks and leaves only), or mint are better kept in paper bags in the fridge or wrapped in paper and in a plastic bag in the fridge.

7. Taking a warm shower in the morning 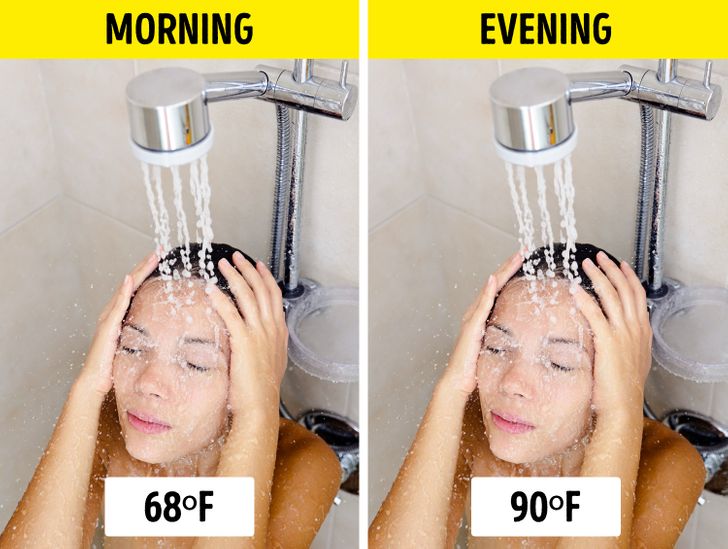 Another eternal question is if it’s better to shower in the morning or at night. Taking a morning shower clearly wakes you up. But in order to have positive effects, it’s better to have a somewhat colder shower, or at least lukewarm. However, if you prefer to shower at night, then not only will this help you to relax before going to bed, but it can help you keep a cleaner environment at home. In this case, you can use lukewarm water, but never too warm to avoid drying out your skin. A good compromise might be to take 2 shorter showers daily at different temperatures. 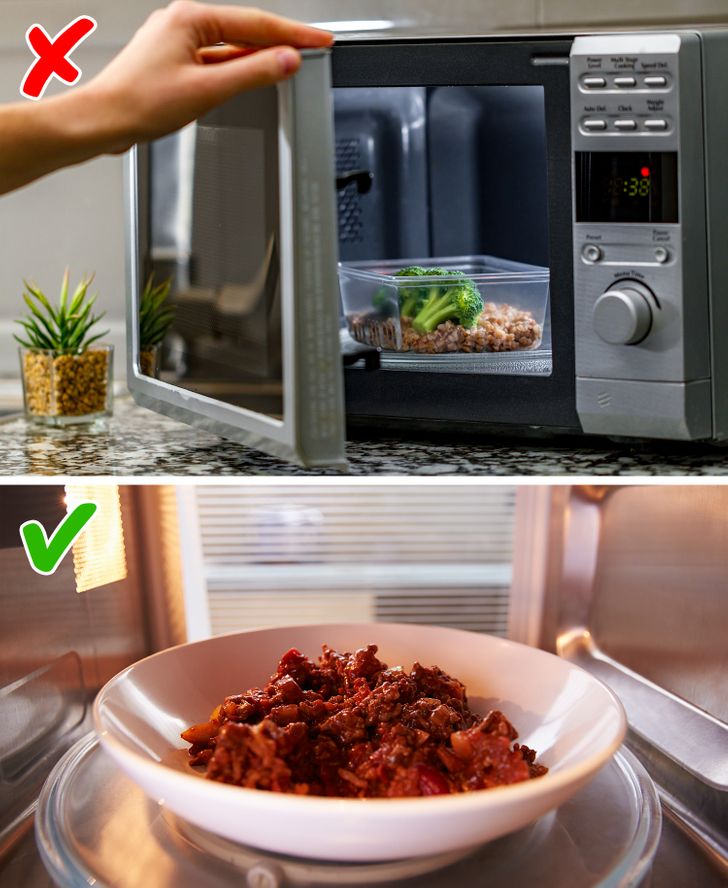 Depending on the type of plastic you’re using, heating it in the microwave could release various chemicals into the foods or liquids that you’re warming up. Although some plastics are deemed safe to heat, it might be better to err on the side of caution if you’re unsure of the exact composition of your containers. Even approved plastics do not guarantee chemical-free food after warming them up.

9. Not washing tin cans before opening them 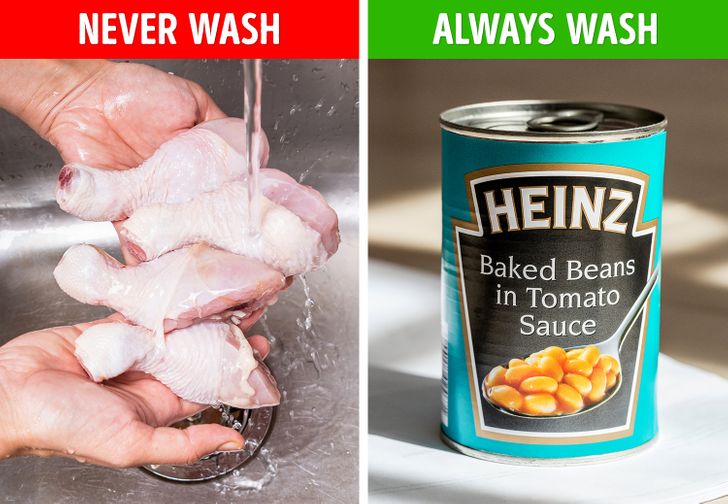 Despite the common belief, washing raw chicken can be counter-productive as it might contaminate other foods, utensils, and countertops. Cans, on the other hand, are hardly washed and wrongly so. It is recommended to wash them so harmful particles don’t fall into the food, especially if it’s a soda can, for example, since you put it directly into your mouth. 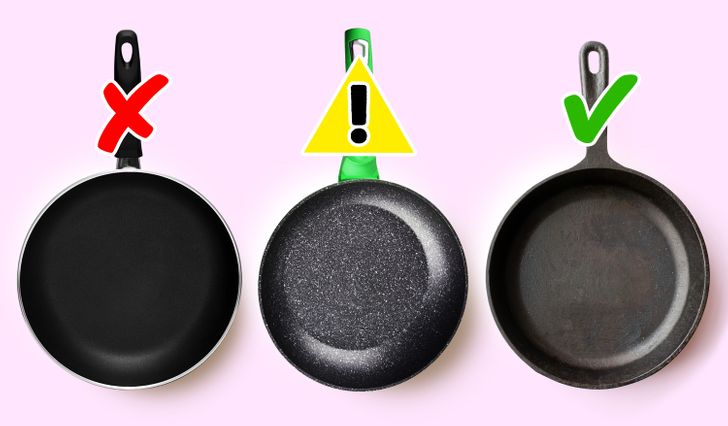 Non-stick pans can become a health issue if they’re not used in the right way. Heating Teflon above 500ºF (when preheating or when cooking a steak, for example) could lead to a release of particles and gases that could harm you. This, of course, doesn’t mean you cannot use it, but rather, that you cannot use it for everything. When cooking meat, for example, choose cast iron pans instead. You can also opt for granite stone for medium-high temperatures, but watch out for its coating staying intact. 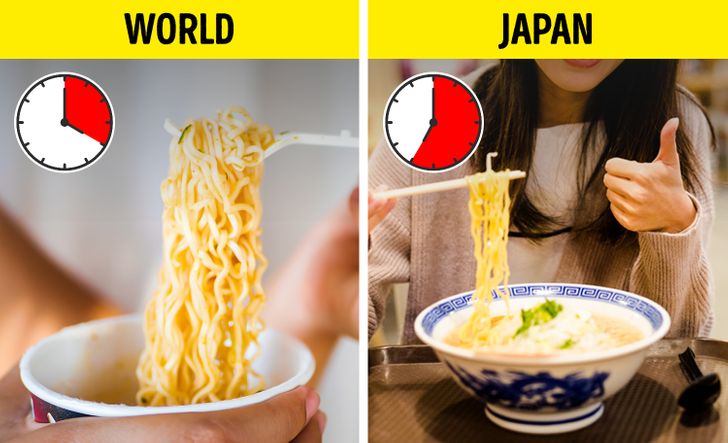 Eating slowly in order to be fully aware of your food is a Japanese custom that might be a part of what helps them stay slim. It turns out that eating slowly can help you eat less and gobbling food makes us overeat because it takes our brain 20 minutes to register what our stomach contains. Chopsticks also play a crucial role in this matter. 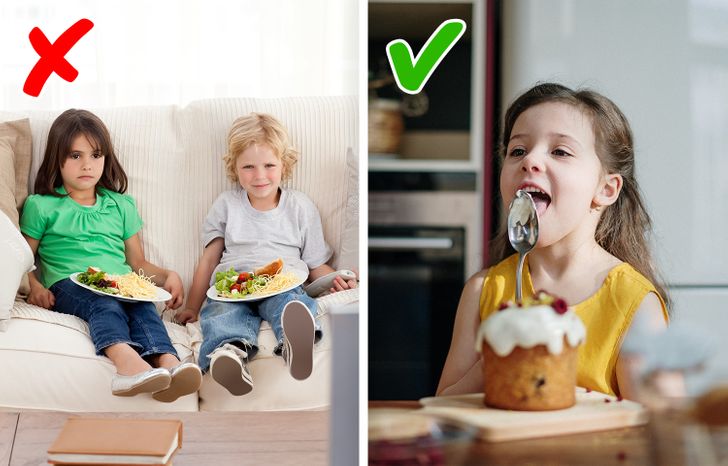 Just in case our previous point didn’t get stressed enough, being aware of your food is important. To put it in different terms, distracted eating might lead to obesity, according to Harvard, because it makes you eat more in one meal.

13. Drinking coffee right after waking up 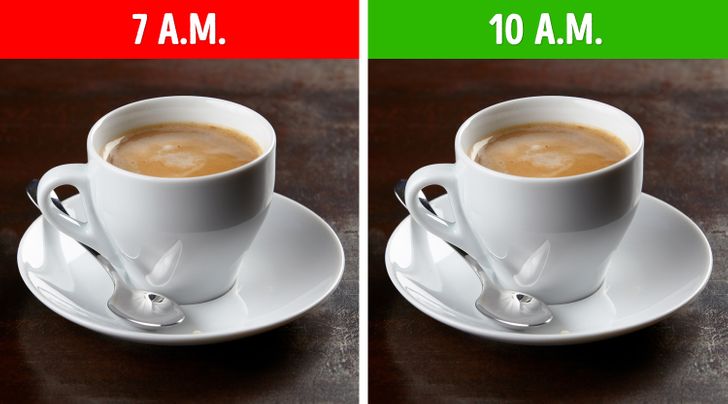 The time at which you drink coffee can actually have an impact on your caffeine tolerance, a study suggests. Cortisol, the so-called “stress hormone” is responsible for keeping you alert. There are about 3 daily peaks of cortisol production, one of them being right after waking up. If you drink coffee during those peaks, your body might get used to creating less cortisol.

14. Eating a hamburger in a line instead of in circles 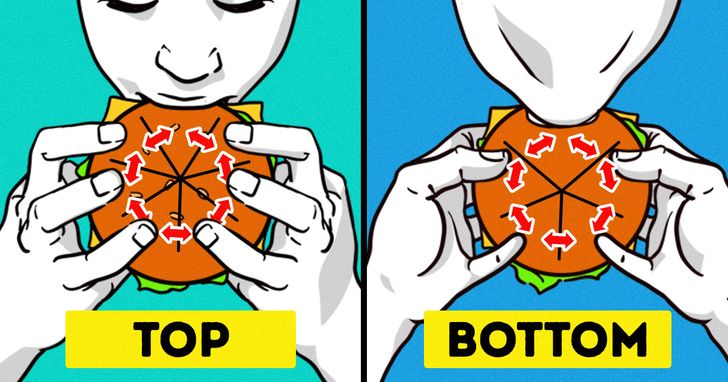 Science has found the best way to eat a hamburger and it’s not the way we normally do it. The right way to chow down is to visually divide the burger into 8 parts and turn it around instead of eating it “linearly.”

15. Holding your burger too tightly 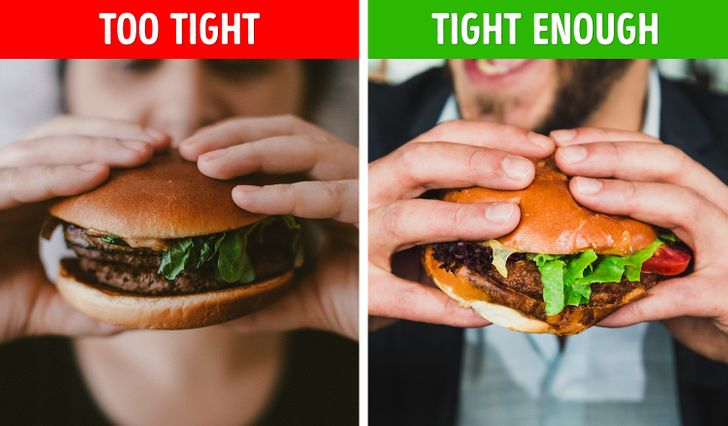 Another problem regarding eating burgers is to hold it too tightly because doing so could cause the bun to get crushed, spilling all its contents out. Ideally, as shown above, the thumbs and pinkies should be at the bottom of the burger, and the middle 3 fingers on each hand should be on top — but you have to hold it with both hands, making it more difficult to eat your fries.

16. Eating Pringles using an A4 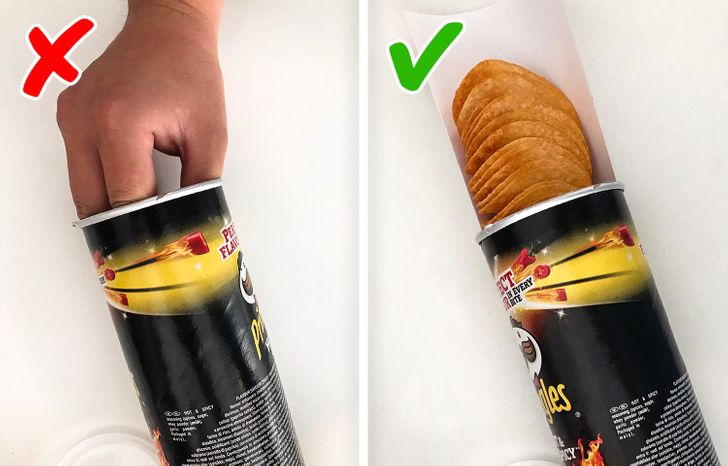 You’ve probably been eating Pringles wrong, but that’s ok. Apparently, Pringles packaging is not only designed to keep the chips from falling apart during transport. In fact, by folding an A4 in half and just inserting it into the canister, you can take it in and out without the chips crumbling. 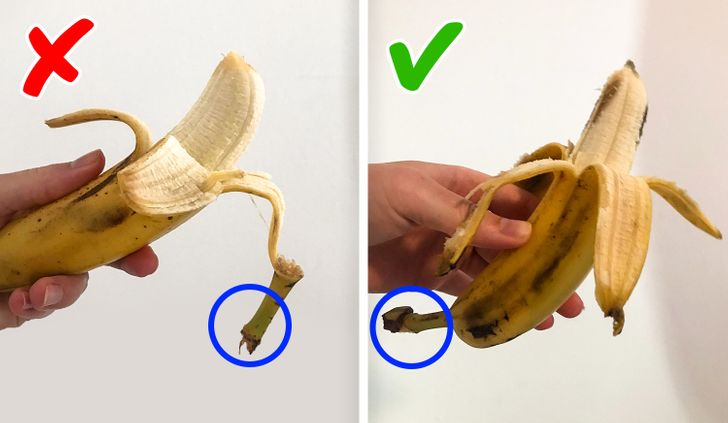 If you’ve ever seen how monkeys peel bananas, you might have noticed that they do it slightly differently than us. But you don’t need to be as messy about it. It’s just that peeling it backward is easier because you peel it more cleanly. So next time you’re eating a banana, turn it upside down and pinch the tip to peel it back.

18. Eating Chinese takeout without turning it into a plate

The original patent for the now-classic takeout box was filed in 1894 and since, it has basically remained the same, proving its design was very well thought out. It’s mainly meant to hold liquids, but also, if you pop out the wire handle, you can unfold the box for it to serve as a plate.

19. Dissolving sugar in a circular stirring motion instead of a linear one 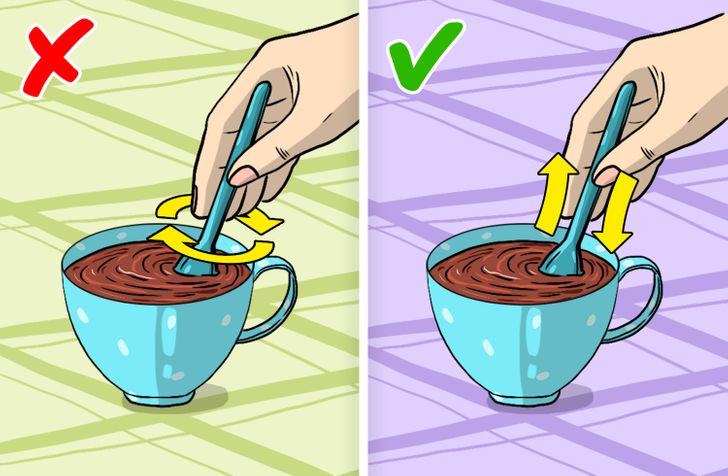 Despite circular stirring being the most popular way of dissolving sugar in a cup of tea, the right way to do it is actually in a linear motion. This helps to reduce splashes and allows you to dissolve sugar cubes faster. 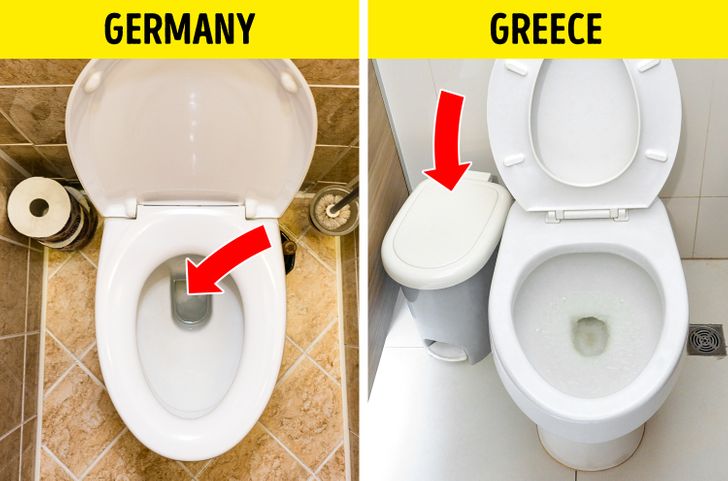 Flushing toilet paper might seem like the obvious thing to do, but it depends on where you’re doing it. For example, in countries like Greece, Turkey, Bulgaria, and others, toilet paper should be disposed of in a bin located next to the toilet seat. That’s because not all sewage systems are equipped to cope with toilet paper, even if it’s highly degradable in water.

Which of these things have you been doing wrong? Do you know any other hacks or things that should be included in this list? Let us know in the comments and post pictures of them if you can!