Cockroaches are among the commonest causes of allergy in the Hispanic and African American communities in the United States, and this is mostly associated with relatively higher exposure rates.

The best known cockroach species are Blatellagermanica and Periplanetaamericana and both are known to cause both asthma and allergic reactions in sensitive individuals. 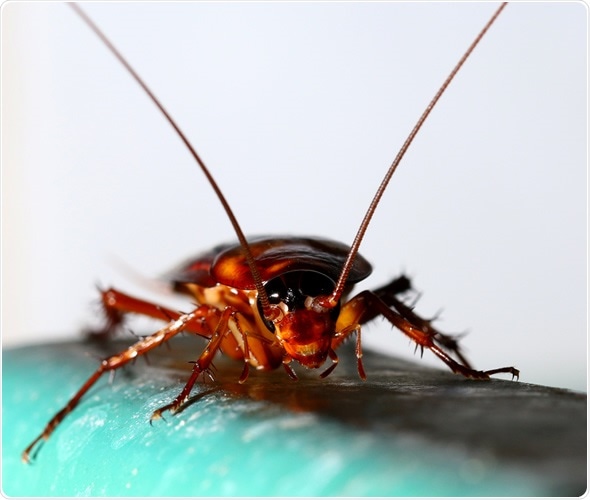 When cockroach exposure occurs in early infancy, wheezing and asthmatic attacks are often the main consequences in allergic infants.

Symptoms of cockroach allergy range from allergic rhinitis, with predominantly nasal symptoms, to asthmatic wheezing leading to more episodes of hospitalization and absenteeism from work.

Cockroaches produce a variety of sensitizing proteins such as Bla g4 and Bla g5. The risk of developing asthma is maximum when a high exposure to cockroach allergens is associated with cockroach allergy.

Proteases in cockroach remnants may degrade the epithelial barrier in the human airways, allowing for easier penetration of the allergens and immune activation. Both innate and adaptive immunity is involved, resulting in a full-scale hypersensitivity reaction.Neither of these factors is responsible for asthma by itself. When cockroach allergens were inhaled, bronchoconstriction occurred in such patients.

Early, consistent, and intensive exposure to cockroach proteins, especially in early life, results in asthma and allergies. Thus, children with a positive skin test are three times as likely to be hospitalized, to require more visits to healthcare professionals, and to miss more school days than non-allergic children living in the same environment.

A diagnosis of cockroach allergy is usually made on the basis of clinical symptoms of respiratory hypersensitivity along with a positive response to skin tests for cockroach allergens such as Bla g1.

Treatment consists of frequent meticulous cleaning out of cockroach-infested areas to remove cockroach parts. This may require professional pest control. Immunotherapy is a method that has shown promise in producing desensitization.

Another approach involves the use of the monoclonal anti-human IgE antibody Omalizumab. This drug lowered the incidence of asthma exacerbations by over 70% in patients with cockroach allergy who were exposed to cockroach allergens, besides relieving symptoms and reducing the mean dosage of steroids, or even removing the need for use of steroids.