Cupping therapy is an alternative healing method that involves placing suction cups on the skin to help ease conditions such as pain, muscle knots and swellings. Different forms of this alternative therapy have been practiced in Ancient Egypt, China and Middle Eastern nations. 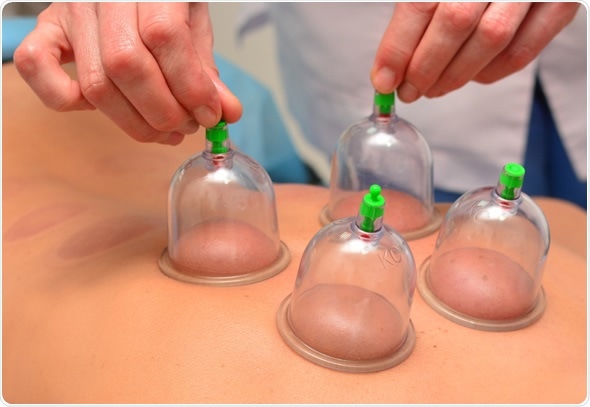 Historical references have been made to cupping therapy in texts such as the Ebers Papyrus written around 1550 BC, and in the written records of the teachings of the Islamic prophet Mohammad.

Cupping therapy has gained popularity in recent years due to famous athletes being reported to have used it for pain management and muscle treatment.

Traditional Chinese Medicine believes that cupping creates a vacuum on the patient’s skin which ensures that the blood flow does not stagnate in the area. The continuous flow of blood through the circulatory system ensures the flow of life force or Qi. By increasing the flow of Qi, cupping therapy is thought to be able to heal many musculoskeletal as well as respiratory diseases such as the common cold.

The suction cups that give the treatment its name, were traditionally made of glass, bamboo, or earthen pottery. Now, the cups used in treatment are made of medicine grade silicone, which range in size from one to three inches in diameter.

The air within the cups is usually heated in order to create a vacuum. This is done by pouring a small amount of alcohol in and lighting it, or burning a piece of paper inside the cup instead. Some practitioners use a lit earbud to create the vacuum. Once the fire is extinguished the cups are quickly placed on the skin to create the suction effect.

The cups need to be placed on naked skin. They are most commonly placed on the back, the arms and legs, the shoulders, the forehead and even on the neck. The exact position and number of the cups is determined by the healer based on the ailment being treated.

The sensation on the skin is said to be a mild pinching effect followed by a feeling of warmth. People tend to find the time spent in a cupping session very relaxing.

Dry cupping is part of Chinese Traditional Medicine. There is also another variation called wet cupping, or Al-Hijamah, which used in some Middle Eastern countries.

In contrast with dry cupping, wet cupping involves an additional stage as part of the treatment process. Namely, after the suction cup is removed, small incisions are made on the skin using a cupping scalpel for controlled bloodletting.

Side Effects of Cupping Therapy

The most obvious side effect is the appearance of spots on the skin where the cups have been placed. The circular bruises may look purple or reddish on the skin. Fortunately, these marks usually take a couple of days to a week to disappear.

The brighter red colors are reflective of good health and vanish the fastest. The darker colors are said to indicate stagnation of Qi and will take longer to dissipate from the skin. Further treatment with cupping is recommended for darker bruises.

Other side effects people have experienced include burns or mild discomfort as a result of cupping. There have been no major side effects reported from this therapy, although in some cases, skin infections have resulted.

Cupping therapy has been popular as a means of pain management for muscular and bone related ailments. Olympic athletes, notably swimmer Michael Phelps and gymnast Alex Naddour, have used cupping, as evidenced by their photographs, during the Rio Olympics. This has also given the alternative healing method a boost in popularity.

Cupping for cellulite is on the rise as a new fad associated with this age old therapy. The concept is based on the thought that cupping helps in dissolving the cellulite where it sits under the skin. A number of people have reported success in reducing cellulite using this process. After catching the public imagination, it is also being promoted as a means of weight loss in some countries.

There is inadequate research to show how effective cupping therapy is for a host of ailments. A number of claims have been made by cupping practitioners in support of its efficacy. With this said, the 135 studies reviewed between 1992 and 2010 by researchers do not show any substantial evidence towards its effectiveness in treating diseases. At the most, a placebo effect has been found by the researchers.

Considerable research is required to understand just how effective cupping therapy truly is as a healing modality. While there may be some benefits associated with this, they have not yet been scientifically documented. As a result, it is not currently possible to say with conviction that specific ailments may be successfully treated by cupping.