When an experienced dentist performs dental implant surgery, it is considered to be one of the safest and most predictable types of dental surgery. The implant provides strong support for teeth replacement and allows the appearance and function of the teeth to be restored, including the stimulation of bone regrowth underneath the tooth. However, several risks and complications are associated with dental implants and should be considered and minimized.

There are various factors that can affect the healing period following a dental implant, such as the quality of the bone and bone density at the site and the response of the tissue to the implant. In order to reduce the risks during the healing period following a dental implant, it is recommended to avoid applying excessive force to the implant as it heals. 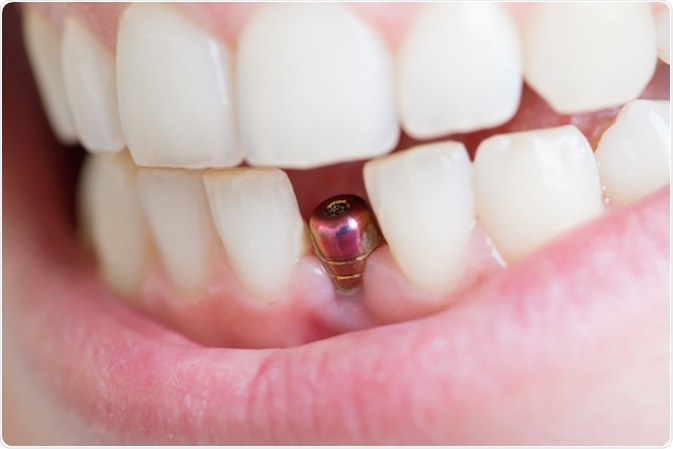 Primary implant stability, which refers to the stability of a dental implant directly following the procedure, is a significant factor for the integration of the implant into the bone. Insufficient primary stability can lead to failure of the implant within the initial weeks.

As the bone surrounding the implants begins to regrow and fuse with the dental implant, this supports the implant and provides secondary stability. This continues to strengthen as the fusion between the bone and implant increases, eventually leading to biological stability in the ideal scenario.

When the implant cannot be placed in the bone sufficiently to provide primary stability of the implant, there is an increased risk of failure of osseointegration. Prophylactic antibiotics are usually given prior to the implantation procedure, as this can help to reduce the risk of implant failure by a third.

During the procedure to place a dental implant in the jaw, some of the nearby anatomic structures are sometimes injured. This includes perforation of the maxillary sinus, inferior border, lingual plate, labial plate, inferior alveolar canal, or gingiva.

If the maxillary sinus cavity is perforated by the implant, for example, this can lead to sinus problems and infections in the area in the future.

Infection is a considerable complication of dental implantation. Infection can occur in the affected area, presenting as an abscess, fistula, suppuration, inflammation or radiolucency. Additionally, it can also affect wider areas of the body to cause a systemic infection.

Although antibiotics are often given prior to the implantation procedure to help increase the chance of success of integration, they are unlikely to help reduce the risk of infection.

Excessive bone loss in the area of the dental implant can reduce the stability of the implant replacement and usually requires intervention.

Bone loss between the implants and natural teeth can also lead to the appearance of black triangles between the teeth, which are not aesthetically pleasing and increase the difficulty of maintaining clean teeth.

Breakage or fracture of the dental implant abutment screw is a serious complication that cannot be easily fixed. It can occasionally be salvaged with the removal of the screw and replacement of the dental implant, but the remaining bone may not be strong enough to support a new implant in some cases.

Fracture of an abutment can be fixed by replacing the abutment and crown. This is an aesthetic complication that does not have a significant impact on the fusion of the implant and the bone, thus is much easier to handle than breakage of the abutment screw.

Other Complications and Risks

There are also some other complications and risks linked to dental implants such as:

In order to increase the likelihood of success of a dental implant, the mouth, gums and jaws should be in a healthy condition. There are some cases when a dental implant is contraindicated because the risk of failure is significantly higher, such as if the patient has:

This is because people with these conditions have an increased risk of infection and implant failure, or it is more likely that the dental implantation will fail. Smokers should be encouraged to quit before they are offered a dental implant as quitting significantly increases the chances of success.