A dermatofibroma is a skin tumor composed of oval cells appearing similar to histiocytes or spindle cells. For this reason it is also called a common fibrous histiocytoma in the most frequently observed form. 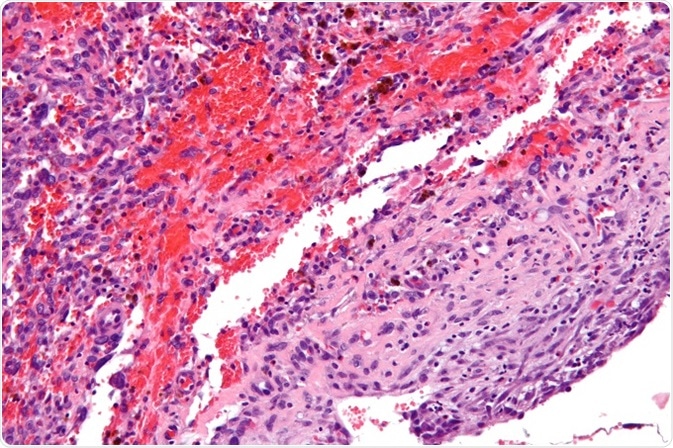 It is usually yellowish-brown and somewhat scaly. It is usually solitary, and grows up to 0.5-1 cm in size. The most common site for a dermatofibroma is an extremity, most frequently the leg.

The growth may have several different presentations, however. The surface may be any color between tan and red. The size is usually small, about a centimeter or so, but atypical cases may have a diameter of 5 cm or more. Though commonly solitary, in some individuals several dermatofibromatous tumors may be present. In some rare cases, usually in individuals with altered or autoimmune phenomena, multiple nodules occur, namely, 15 or more.

In addition to its typically solitary nature, dark color, and small size, a dermatofibroma is firm-to-hard to the touch, more so than most other benign growths of the skin, and its covering epidermis is tethered to it. As a result it dimples readily when the skin is lightly squeezed from the sides of the lesion. This is called the “dimple” or Fitzpatrick sign. The same dimpling occurs when it is exposed to sudden cold such as an ice cube, which makes the skin contract.

Though it is generally asymptomatic except for the bump it makes, it may cause itching and pain at times, and in cases associated with some degree of trauma, it may even ulcerate.

A dermatofibroma is diagnosed chiefly on the basis of its clinical features, namely, its firm feel and a positive pinch test. Dermoscopic examination will often show the characteristic pattern of peripheral reticular pigmentation with a central white spot. Excision biopsy will be required in cases which closely resemble other conditions. In such biopsies, the subcutaneous fat must also be removed.

The histopathologic features include hyperplasia of the epidermis and basal cell hyperpigmentation layer, which is called the ‘dirty fingernail’ sign. The tumor is in the dermis and is non-encapsulated. Whorls of spindle cells will be seen. However, several histological variants do occur, including cellular, aneurysmal, atrophic, and atypical dermatofibroma.

Immunohistochemical testing reveals antibodies to factor XIIIa in the tumor.

There are several conditions that present with similar clinical features, and must be considered in the differential diagnosis. These include: