Dysbiosis is characterized by a change in microbiota. Such imbalance in natural colonies of microflora inside human body may cause a range of diseases. Studies have suggested that changes to the microbiome can also contribute to ageing.

The Microbiome encompasses the complete genetic composition of the microbiota (the complete collection of microbes found in areas such as the skin, urinary tract, respiratory tract, and the gut).

Gut microbiota start inhabiting the body as soon as a newborn is exposed to microbes. They enter through maternal, dietary, or environmental routes.

Microbes such as Actinobacteria, Proteobacteria, and Firmicutes are the main phyla present during early childhood, out of which Actinobacteria are more dominant. Gut microbiota become more stable at 1-2 years of age.

Below is the composition of microbiota at various stages of human development: 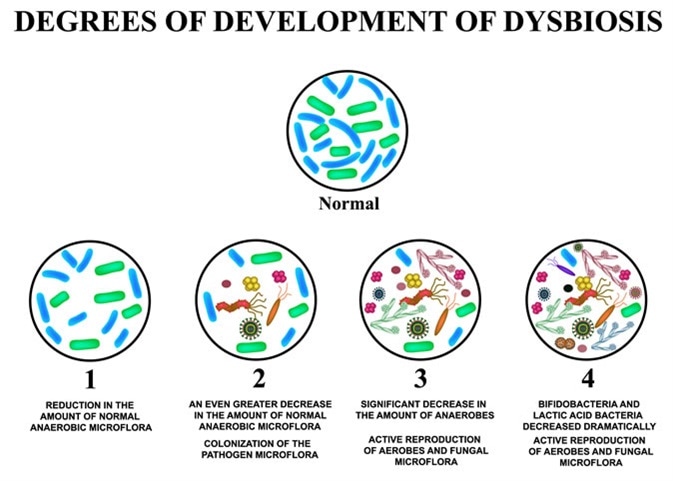 4 degrees of development of dysbiosis. Dysbacteriosis of the intestine. The large intestine. dysbiosis of colon. Image Credit: Timonina / Shutterstock

Factors such as altered lifestyle, nutrition, mobility, and pathophysiologic changes could lead to dysbiosis in the gut.

Less nutrient intake resulting from factors such as poor dental health, leads to less fiber and protein intake. Such dietary shift can be interlinked to the alteration in the gut microbe ecosystem.

Studies indicate that a difference in microbiota was observed in elderly people who lived in assisted living facilities such as old-age homes and community-based elderly homes. Geriatrics who lived in community settings consumed a variety of foods, which led diverse microbiota to colonize in their gut; thereby helping them maintain a healthy gut microbiota.

Consumption of the non-steroidal anti-inflammatory drugs (NSAIDs) can also alter the microbiota in the gut. An overall reduction in certain good microbes like Actinobacteria and Firmicutes was observed in geriatrics who consumed NSAIDs for a long period of time. Studies also indicated that elderly who suffered from gastric problems and used medications which fall into the category of proton pump inhibitors also showed disturbed gut microbiota.

Increased risk of infections – Elderly are more prone to nosocomial infections (hospital-induced) and suffer from a type of diarrhea caused by a bacterium known as clostridium difficile. Advanced techniques such as stool transplantation have been found to be beneficial in treating clostridium difficile-induced diarrhea. Healthy microbiota produce short-chain fatty acids (SCFAs) such as acetate, butyrate, and propionate, which contribute in maintaining a healthy gut. Fecal specimens of elderly indicated a decreased production of SCFAs. Further, it can be linked with the reduction in certain bacteria such as Eubacterium and F. praunsnitzii which promote the production of SCFAs.

Frailty – A reduction in the good bacteria such as bacteria which release butyrate leads to degenerative changes and loss of appetite in the elderly. Frailty is a condition associated with reduced physiological store and increase in age-related conditions.

Microbiological examination of the stool samples of the elderly indicated a decline in bacteria such as lactobacillus. However, the number of enterobacteriaceae was found in high numbers in the frail elderly.

Metabolism and Age-Related Disorders – It has been found that bacteria release certain substances which contribute in absorption and metabolism of amino acids.

Research indicates that healthy gut microbiota can contribute towards maintenance and regulation of overall body metabolism, and can help in combating age-related disorders such as multiple sclerosis, Parkinson’s disease, and Alzheimer's disease.

Healthy ageing can be achieved by maintaining a balanced gut microbiota by the introduction of the fiber/microbiota-accessible-carbohydrates (MACs)-containing diets and probiotics. Consumption of such foods can curb age-related pathophysiological changes.