Compared to allergies to other foods such as eggs, cow’s milk or nuts, fruit allergies are relatively uncommon. This article will cover the causes, symptoms, diagnosis and management of food allergies in more detail. 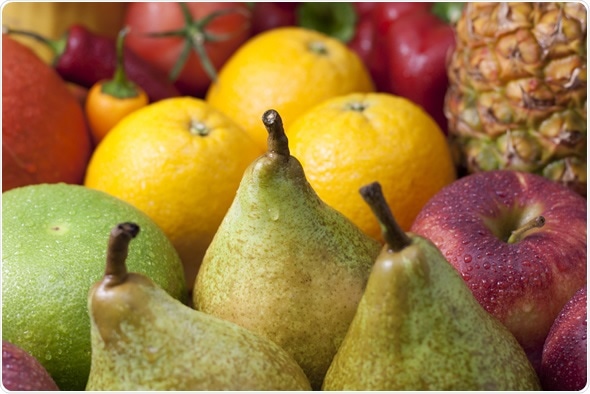 They are often caused by proteins called profilins which are found in pollens from grass, trees and weeds. These proteins are of a similar structure to those found in a range of fruit, vegetables and nuts.

Some people with OAS only react to one or two fruits, nuts or vegetables, while others are allergic to a wide range. Although almost any fruit may be involved, some of the most common culprits include apples, pears, cherries, peaches, plum, kiwi, melon and watermelon.

Symptoms usually settle down within one hour. Fortunately, profilins are easily inactivated during the cooking process and by digestion, meaning the immune system no longer recognizes them.Symptoms usually arise just minutes after exposure to the fruit, although they can sometimes take up to 2 hours to manifest.

Symptoms therefore tend to only occur when raw fruit is eaten and only involve the mouth and throat. People usually develop mild swelling and/or itching in the throat, lips and tongue. Itching in the ears has also been reported.

More occasionally, a severe reaction called anaphylaxis may occur and cause symptoms such as nausea, vomiting and difficulty breathing.

Since symptoms usually settle down relatively quickly once the fruit is swallowed or taken out of the mouth, treatment is not usually required.

If a doctor suspects a patient has OAS, they will be referred to an allergist who will look at the patient’s health history, ask for details of the allergic reactions and if necessary, perform skin prick testing. Here, small amounts of the allergen are applied to the skin, which is then pricked to allow the substance underneath the skin.

A patient who is allergic will develop an itchy bump in the exposed area within minutes.

People diagnosed with OAS should avoid the foods that trigger an allergic reaction. They will usually only need to avoid raw fruit and not need to worry about eating these same fruits once they are well cooked.

In some cases, people with OAS are only allergic to one variety of a certain fruit and find that other varieties can be tolerated. However, if they have ever experienced a severe reaction such as difficulty breathing or anaphylaxis, then all forms of the fruit should be avoided.

In cases of reaction

If a person with OAS does experience an allergic reaction, they should rinse their mouth with water and try to relax. Drinking a hot beverage may help to distort the fruit allergen and prevent its further recognition by the immune system.

Symptoms such as itching in the throat, lips and tongue areas should settle down within one hour, but if the symptoms are particularly uncomfortable, it may be advisable to take an antihistamine such as loratadine.

Most people with OAS do not experience severe symptoms but if breathing difficulties arise, the throat begins to feel tight or the voice becomes hoarse, then a person may be experiencing anaphylactic shock and emergency treatment will be required so that adrenaline can be administered.