Athough meat allergy is uncommon, meat from any type of mammal such as pork, lamb or beef can trigger an allergic reaction.

A person can develop a meat allergy at any time during their life. If a person does develop such an allergy to one type of meat, it is also possible that they will become allergic to other forms including types of poultry such as turkey, chicken or duck.

Some studies have shown that a small proportion of children with a milk allergy also develop a beef allergy. 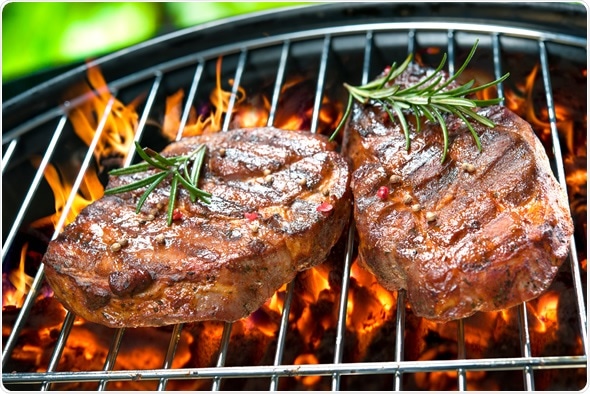 If a person is allergic to meat, the body’s immune system mistakes the meat for a harmful substance or allergen.

The first time this happens, the immune system triggers the production of immunoglobulin E (IgE) antibodies, which become attached to immune cells. This is referred to as sensitization.

The next time the meat is eaten, allergens in it bind to IgE, which triggers those immune cells to release histamine and various other chemicals, to fight off the allergen.

Depending on where these chemicals are released, the resulting symptoms may range from a mild reaction and include hives, sneezing, wheezing, skin rash or headache, to a severe reaction called anaphylaxis, which can be life threatening if it goes untreated.

If a doctor suspects a person has a meat allergy, the patient will be referred to an allergist who will assess their medical history and any symptoms they have experienced.

A blood test and/or a skin prick test may be arranged. For the skin prick test, skin on the back or forearm is pricked using a probe that contains a very small amount of the suspected allergen.

A blood test is used to measure the amount of food-specific IgE antibodies in the body and results are usually available after one or two weeks.If a person is allergic to that allergen, they will develop a small bump at the site where the allergen was applied. The result can usually be seen within around 20 minutes.

The most important aspect of managing meat allergy is avoidance of the food that triggers a reaction.

A person who has been diagnosed with an allergy should ensure that they check the ingredients listed on the back of any food products they purchase at consumer outlets or catering establishments.

If a reaction does occur, symptoms should be controlled with antihistamines or corticosteroids.

For all food allergies including meat allergy, it is not possible to predict how severe a reaction will be.

People who have previously only experienced mild symptoms when they have a reaction may suddenly find they develop anaphylaxis on subsequent exposure to the allergen.

In the case of anaphylaxis, the first line treatment approach is the administration of epinephrine and a person who is diagnosed with a meat allergy will probably be prescribed an adrenalin auto-injector which they are taught how to use, so they can self-administer the drug, should a severe reaction occur.

People should always make sure they have two doses available in case another severe reaction occurs.

The medication should be administered as soon as any of the following symptoms arise:

Addiononally, any combination of these together with vomiting, diarrhea or pain in the abdomen may be indicative of anaphylaxis.

A bite from a tick called the Lone Star tick has recently been identified as a cause of red meat allergy, which is common in south-eastern areas of the United States.

A bite from this tick causes sensitization to the carbohydrate galactose-alpha 1, 3 galactose (alpha-gal).

Although alpha-gal is not the only carbohydrate allergen to have been identified, this allergen does differ to other carbohydrates in terms of being able to cause anaphylaxis.

Not every person who receives such a bite develops a red meat allergy, but those who do can only prevent reactions by avoiding the consumption of mammalian meats such as beef, pork, venison, lamb and bison.

Although food allergies usually trigger symptoms within minutes after exposure to the allergen, alpha-gal reactions often take between three and six hours to trigger symptoms. This delay poses a challenge in terms of identifying, diagnosing and treating the allergic reaction.

Evaluation by an expert food allergist who is already familiar with this condition is therefore advised.