Tartrazine is the second most widely used food coloring agent. It is added to a broad range of foods such as soft drinks, chips, pudding, honey, pickles, gum, mustard, gelatin, and baked goods. Tartrazine is a bright yellow azo dye that is more stable and a cheaper alternative to natural food dyes. It is known by other names such as FD&C Yellow No. 5 and E 102 Europe. 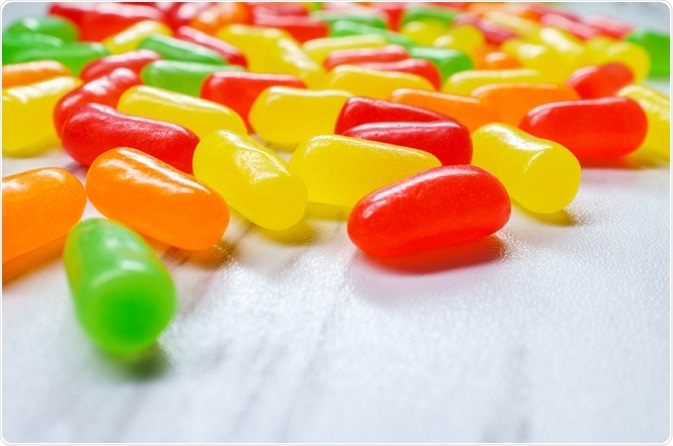 Tartrazine is also found in some cosmetics and personal care products such as liquid soaps, lotions, hand sanitizer, perfumes, nail polish, and shampoos. Several medications contain tartrazine, which renders a yellow or orange hue to them. It is usually added to antacids, vitamins, cough syrups, and lotions. Tartrazine is also used in other products such as inks, crayons, stamp dyes, and glues.

Tartrazine allergy refers to intolerance to this additive. In a relatively small population, it causes allergic reactions, the mechanism for which is still not clearly understood. Although several studies indicate that tartrazine and similar additives cause hyperactivity in kids, the FDA rejected these claims for want of sufficient evidence.

According to studies, adverse reactions to tartrazine may also affect the gastrointestinal tract, central nervous system, and respiratory tract, though many of these effects are rare and unconfirmed. Some studies even claim that tartrazine causes thyroid tumors and lymphomas, but the evidence is not convincing enough.

Available evidence from various studies on the effects of tartrazine intolerance shows that adverse reactions to tartrazine are of a pharmacological nature and not immunological. Therefore sensitization after ingestion is largely unlikely. Extensive cross-reactivity of tartrazine with other azo dyes and natural additives further complicates research in this area.

Management of tartrazine allergy is mainly by allergen avoidance. People who are tartrazine intolerant should avoid foods that contain the additive. Dietary modification is done in allergic people by educating the parents and carers about the identification and avoidance of additives.

When avoidance is not possible, allergen exposure should be treated based on the degree and nature of the allergic response. If allergy symptoms are mild and self-limiting, no treatment is required. Allergic rhinitis and some skin conditions can be treated using nasal sprays and antihistamines. Asthmatic symptoms are treated using antihistamines and bronchodilators. Beta agonist inhalation is also a solution for asthma-related symptoms such as wheezing after tartrazine exposure. Oral steroids can be used to treat moderate allergic reactions.

The popularity and widespread availability of azo dyes such as tartrazine have made these colorful compounds an indispensable part of the food industry. Several studies focused on tartrazine sensitivity have come up with contradictory results, and therefore the ill effects of tartrazine are deemed subjective. Wherever studies indicated sensitivity, it has been proved to be general sensitivity to azo dyes and not tartrazine in isolation.

In 1986, the Committee on Hypersensitivity to Food Constituents at the FDA reported that only about 1 in 10,000 people are sensitive enough to develop hives after tartrazine ingestion. It was also concluded that sufficient evidence is not available to prove tartrazine’s role in triggering asthma attacks. However, the FDA directed manufacturers to identify the compound in the ingredient label of products as Yellow No. 5 so as to allow tartrazine-sensitive people to avoid such products.