In the event of an allergic reaction, a range of tests are available to determine which substance is the primary cause. Various combinations of skin, blood, and/or challenge tests may be used, depending on symptoms and the patient’s medical history.

Skin tests are often the first choice due to their convenience and speed. These tests are used to screen potential allergens, which is the term used to describe allergy-causing substances, by applying them to the skin and observing whether they trigger a reaction.

A skin prick test is normally used to detect allergies that cause an immediate reaction on contact with the skin, such as hay fever or food allergies. Drops of a solution containing an allergen such as animal hair or pollen, are applied to different marked areas of the skin. The skin is then pricked at each site to allow the allergen to enter the skin. For food allergies, the lancet is dipped in the food before pricking the skin. 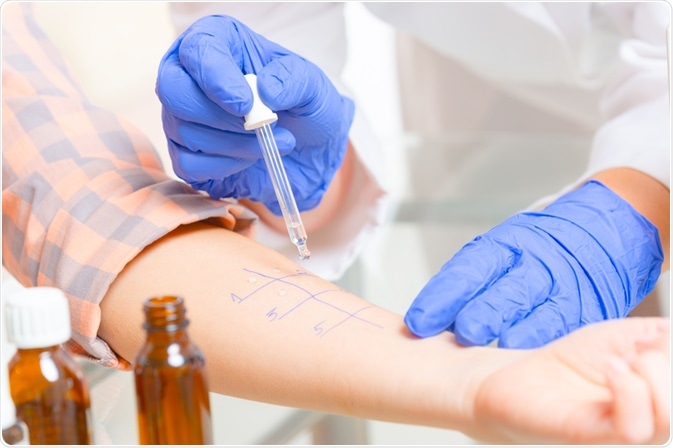 An allergic reaction is confirmed when the skin reddens and/or if a small bump, otherwise known as a wheal, arises at the marked site.

An intradermal test is similar to the skin prick test, except that the allergen solution is injected directly into the skin. The primary advantage of an intradermal injection is that it can detect weaker allergic reactions.

The disadvantages, however, are the unpleasantness of the injection and the stronger allergic reactions that it can trigger. Therefore, intradermal tests are usually only performed when the response to a skin prick test is insufficient.

A skin scratch test is generally used if the skin prick test is inconclusive. A small section of skin is removed so that the allergen can be rubbed over the exposed flesh. Through this method, substances are able to penetrate into deeper layers of tissue as compared to the skin prick test, therefore allowing for a stronger reaction. The skin scrape test is similar to a skin scratch test; however, the skin scrape test removes only the top layer of skin.

Bot the skin scratch and scrape tests are considered to be less reliable than the skin prick test, as they cannot control the amount of allergen applied to the skin and are more likely to trigger non-allergic skin irritation.

To reduce the risk of strong reactions during these tests, the substance(s) can be rubbed on the patient without breaking the skin. Reactions take longer to detect than the skin prick test, evidenced as red, bumpy skin after about 20 minutes if allergy occurs.

The patch test is used to screen substances if allergic symptoms are expected to be observed between one and three days after exposure to the allergen.

Patches containing different allergens are applied to a person’s back and left in place for 48 hours. The patches are then removed, and the skin examined for signs of a hypersensitive reaction. A second assessment is performed after 96 hours, and sometimes additionally after 7 to 10 days in some people.

Triggers are often single substances that can be found in a variety of materials such as medications (e.g. lidocaine), cosmetics (preservatives or fragrances), jewelry (nickel or cobalt) or gloves (latex). If a contact allergy occurs, the skin swells, turns red, itches and small blisters may form. 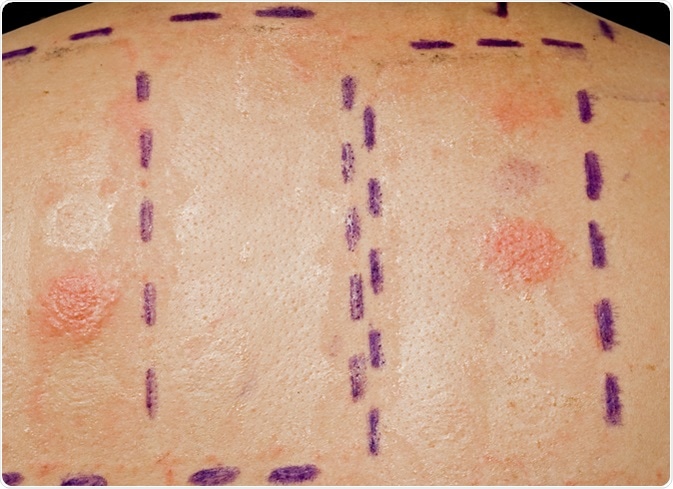 Blood tests may also be conducted in addition to, or instead of, skin tests. A skin prick test may not suitable when:

A blood test may also be used to confirm results if skin tests are not clear. There are a variety of blood tests available, including enzyme-linked immunosorbent assay (ELISA), in-vitro basophil histamine release assay, and radioallergosorbent test.

A blood test begins with drawing blood from a vein in the patient's arm to provide a blood sample. An allergen is then added to the blood sample and the number of immunoglobulin E (IgE) antibodies produced in response to the allergen are measured. Although allergies are likely to increase the number of circulating IgE antibodies, this is only an indication.

High numbers of IgE antibodies can also result from parasite infections and smoking; therefore, it is difficult to form definitive conclusions based on blood tests alone. In addition, the number of antibodies cannot be correlated with symptom severity.

Challenge tests are used to identify a trigger when a person’s allergy does not produce a strong skin reaction. The body is exposed to the allergen in its natural form through its typical route and then monitored for signs of a reaction.

For example, to determine the cause of hay fever, a specific type of pollen can be applied to the nasal mucosa. The patient is subsequently monitored for sneezing, a stuffy nose, and/or watery eyes. Food allergies can also be tested by feeding the patient the suspected trigger. Different types of allergens can also be used to challenge the lungs or eyes in a similar way.

Patients should not have any allergic symptoms before a challenge test and medical supervision is necessary throughout the test, as these allergens can stimulate serious allergic reactions.

Steps to identifying an allergy trigger

In general, to identify an allergy trigger, a skin test is the first step. If this is inconclusive, too risky, and/or the allergen cannot be made into an appropriate solution, a blood test is then performed.

A challenge test is often the third option if the former two are not possible or results are inadequate. Whichever test is used, the results must be interpreted along with the patient’s medical history in order to provide a formal diagnosis of the allergy.