Aagenaes syndrome is a rare disorder characterized by impaired bile flow from the liver resulting in cholestasis.

Blockage of bile secretion (hepatic cholestasis) results in swelling and fluid retention (lymphedema) in the lower extremities. Neonatal cholestasis in patients with Aagenaes syndrome usually diminishes during early childhood, but remains intermittent in nature. Despite this,  Aagenaes syndrome often gradually develops into cirrhosis of liver and giant-cell hepatitis accompanied by scarring of the portal tract tissues.

Symptoms and diagnosis of Aagenaes syndrome

Unfortunately, there are currently no validated diagnostic tests for the condition. Aagenaes syndrome is diagnosed by evaluation of the symptoms and co-morbidities such as lymphedema.

The condition is mainly observed in infants from Norwegian origin, with more than 50% cases being observed in southern Norway. However, it is also prevalent in individuals from other European regions and the United States.The disorder is idiopathic and familial in nature. The exact genetic cause remains inconclusive. However, it is considered to be recessively inherited. The gene is located on chromosome 15q.

In a whole-genome screen analysis by Bull et al. (2000), the regions considered similar in the patients with Aagenaes syndrome were identified. The most promising regions were further mapped in larger sets of Norwegian individuals, DNA samples from 8 patients and their 7 non-symptomatic relatives from the same ancestral lineage were evaluated.

The results revealed an extensive similarity in the alleles and haploid genotype of the patients over a region on the chromosome 15q between D15S979 and D15S652 markers, the characteristic which was absent in the unaffected relatives.

This finding suggested that all the Norwegian patients with Aagenaes syndrome could be homozygous with similar gene mutation inherited in dormant form via a common ancestor.

Living with a genetic or rare disease can significantly affect the daily lives of patients and their families. As there is a huge scope for further research towards finding a definitive cure for this ailment, community care and support groups are of pivotal importance.

Support and advocacy groups can help patients connect with others with similar condition. These groups provide patient-centred information and are the driving force behind research for better treatments and possible cures. Advisors in these groups help direct patients and their family members to research, resources, and services pertaining to this disorder.

Aagenaes syndrome is named after Oystein Aagenaes, the Norwegian pediatrician who described this syndrome for the first time  in 1968. Worldwide, only 100 patients were diagnosed before 2014.

Aagenaes syndrome is also known as Lymphoedema cholestasis syndrome 1. The congenital lymphoid hypoplasia usually affects lymphatic vessels due to intra-hepatic cholestasis. Cholestasis is the pathophysiological condition and develops here as it is associated with the impaired release of bile from the liver and its accumulation within the liver (intra-hepatic). 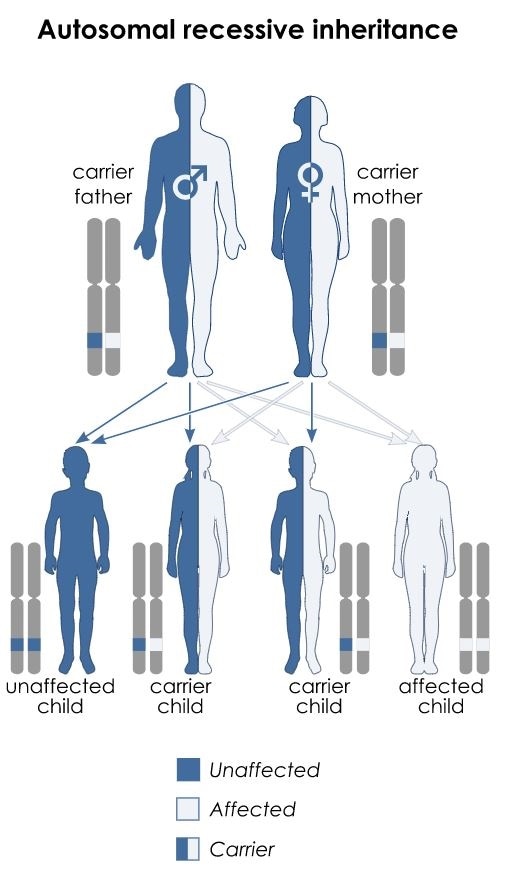 By Kashmiri, based on earlier work by Domaina - Own work based on Autosomal dominant - en.svg and Autorecessive.jpg, CC BY-SA 3.0, Link

The generalized Aagenaes syndrome symptoms include:

At the early stage of lifeThe symptoms are gradually progressive and can be classified into two stages of life; early stage and after adolescent age.

In puberty and in pregnancy

How is Aagenaes Syndrome Diagnosed?

Aagenaes syndrome is a rare disease, and the only identified hereditary lymphoedema which slows down or ceases bile flow resulting in cholestasis. However, lymphoedema may develop on its own due to other underlying hepatic ailments or lymphatic system disorders.

Aagenaes syndrome can easily be misdiagnosed with biliary atresia, leading to unnecessary surgical intervention. Therefore, a proper diagnosis is imperative to start a correct clinical treatment of Aagenaes syndrome.

The diagnosis of Aagenaes syndrome is challenging because the early signs of lymphoedema are difficult to detect, which further delays initiation of medical intervention to treat Aagenaes syndrome.

If someone is affected by Aagenaes syndrome first  in the family then it becomes difficult to diagnose until the lymphoedema symptom appears. Cholestasis can be diagnosed within the first year of age, but in some patients with Aagenaes syndrome, lymphoedema develops gradually with age.

Diagnosis based on clinical evaluation

Jaundice, dark colored urine, pale colored stool, fatigue, and pruritus are the common clinical signs for both intra and extra-hepatic cholestasis, which makes it difficult to determine the actual underlying cause.

The existence of Aagenaes syndrome in family history can be considered as a major finding in the clinical investigation of this disease. Clinical diagnosis of lymphoedema at the initial stage is the most challenging until the symptoms appear which further delays the confirmation of Aagenaes syndrome.A thorough assessment of patient history and careful physical examination are fundamental to diagnose Aagenaes syndrome.

Depending upon the onset, lymphoedema can be divided into three categories like congenital, praecox, or tarda. In case of congenital lymphoedema, the symptoms usually appear within 2 years of age.

In praecox lymphoedema, the onset of symptoms start inbetween 2 to 35 years; however, in most of the cases, it appears near puberty. Tarda is a type of inherent lymphoedema, which usually occurs after 35 years of age. Rates of dyslipidemia and portal hypertension are also common clinical findings in Aagenaes syndrome.

Detection of jaundice is usually followed by identification of certain biomarkers which are diagnosed through blood tests. Within one month of birth, the child with Aagenaes syndrome gets elevated levels of serum bilirubin concentration which may gradually normalize after 3 to 4 years of age.

An increased level of bile acid, i.e. more than 40 μmol/L within 6 months from birth, is observed, which gradually lowers to an extent and reaches a moderately high level within 6 years of age.

Aspartate transaminase (ALT) and alanine transaminase (AST) are two liver enzymes of which levels become extremely elevated in the blood within one month from birth; levels then drop to moderate levels at 2 to 3 years of age.

There are some essential investigations to assess the hepatic conditions:

Abdominal ultrasonography and Magnetic resonance cholangiopancreatography (MRCP) are two techniques used to diagnose Aagenaes syndrome. However, in some patients, the results of these tests can be unclear. In such cases, the patients serum is analyzed for the presence of antimitochondrial antibodies (AMA) or a liver biopsy is taken,

Lymphoscintigraphy is used to determine lymphatic anatomy. The presence of lymphoedema is determined using following methods:

The precise genetic mutation which causes Aagenaes Syndrome has not yet been elucidated. An autosomal recessive inheritance pattern is shown in Aagenaes Syndrome, and the long arm of chromosome 15q has been attributed to the genetic cause in some cases, but this has not been proven in all cases.