Bronchiolitis is defined as an acute inflammation of bronchioles in the lower respiratory tract that results in airway obstruction with accompanying progressive dyspnea and poor feeding. This condition is most commonly observed in children under the age of 2, with a peak age between 2 and 6 months.

Approximately 12% of infants develop bronchiolitis every year, and its incidence displays a seasonal pattern, with a majority of cases occurring from November to May. The diagnosis is mostly clinical (laboratory investigations have a limited role), and inappropriate treatment is often prescribed. 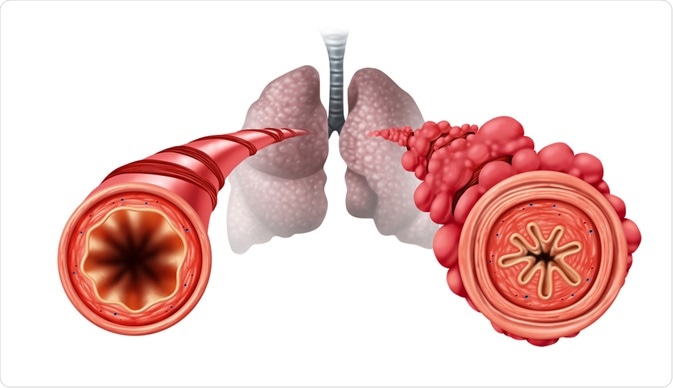 The most common cause of bronchiolitis is a respiratory syncytial virus (RSV), especially during the winter and early spring months. Other pathogenic microorganisms associated with this disease are parainfluenza and influenza viruses, human metapneumovirus, adenovirus, rhinovirus, herpes simplex virus, as well as the bacterium Mycoplasma pneumoniae. Co-infection with different agents is also possible.

The etiologic agent invades the respiratory tract, causing necrosis and shedding of the respiratory epithelial cells of the smaller airways which, in turn, initiates an immune response with inflammatory infiltration and edema. As a result, the bronchioles become narrowed, which leads to air trapping and atelectasis.

Bronchiolitis obliterans represents a rare and severe manifestation of chronic obstructive pulmonary disease (COPD) that stems from damage to the epithelial cells of the lower respiratory tract. This type of bronchiolitis is usually seen in adults and was initially described as a complication of graft versus host disease in lung or bone marrow transplant recipients.

More serious presentations of bronchiolitis include dehydration, lethargy, significant respiratory accessory muscle usage, head bobbing, and nasal flaring. Apnea can be observed in up to 20% of hospitalized infants, and complications, such as admissions to the intensive care unit, mechanical ventilation, and death, are highest in children with cardiac and lung illnesses, as well as those with immunocompromised status.Bronchiolitis usually presents with a two to three-day upper respiratory prodrome of rhinorrhea, cough, and low-grade fever. These symptoms then progress to wheezing and tachypnea. There is also an occurrence of specific disease indicators in infants, such as irritability, post-tussive vomiting, and feeding difficulties.

Bronchiolitis is primarily a clinical diagnosis based on symptoms and signs from the medical history and physical examination. Pulse oximetry can be helpful in the identification of hypoxemia. Although a chest X-ray is not routinely recommended, it should be considered in select cases to rule out other causes of wheezing, such as foreign body or congestive heart failure.

Historically, bronchiolitis represents a self-limited disease that necessitates only supportive care, such as adequate oxygenation and hydration, until the condition abates. Nasal suctioning is commonly used to reduce secretions and, in certain instances, mechanical ventilation is warranted to maintain gas exchange.

The efficacy of bronchodilators in the management of bronchiolitis is questionable and depends on the degree of bronchospasm. Infants with a positive family history of atopic diseases may have a substantial degree of bronchospasm present, with the current illness representing the first episode of reactive airways disease secondary to lower respiratory tract infection.

Reviews have shown that β-agonists result in only a limited short-term improvement. Furthermore, their use does not affect hospitalization rates. Using epinephrine in bronchiolitis patients is thus not supported, albeit there may be some overall benefit from nebulized epinephrine.

Corticosteroids have been thought to help due to the similarity in clinical presentations of bronchiolitis and asthma. However, the beneficial effects of these drugs are small, especially when considering their potential to cause acute adverse effects. Currently, there are no data to support the use of corticosteroids in patients with severe forms of bronchiolitis.

Novel treatment modalities have been researched in patients with bronchiolitis. RSV immunoglobulin and the monoclonal antibody palivizumab, when given intramuscularly in prophylactic monthly doses during RSV season, have been shown to reduce the number of hospitalizations. Purified fusion protein vaccines against the most common viral causes of bronchiolitis are currently under development.