What is Churg-Strauss Syndrome?

Churg-Strauss Syndrome (CSS), also known as eosinophilic granulomatosis with polyangiitis, is a rare disorder that causes blood vessel inflammation and organ damage. The affected individuals usually have a history of allergic rhinitis, asthma and notable elevation of eosinophils in peripheral blood.

What is Churg-Strauss syndrome? 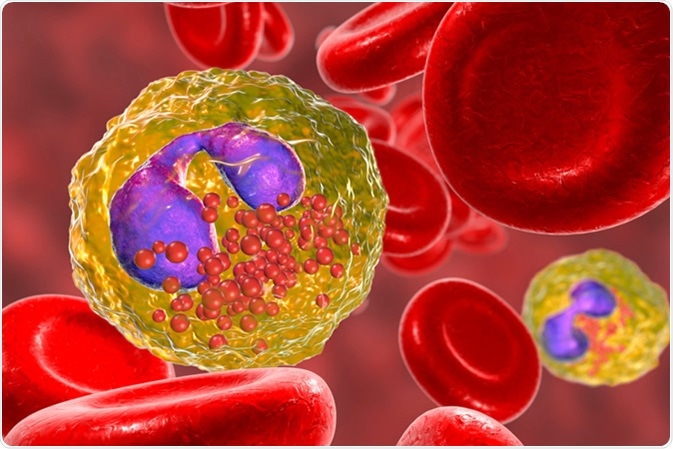 CSS is commonly seen in patients with asthma and tissue eosinophilia. It is a very rare disease, with an estimated prevalence of 2 – 5 new cases per 1 million people in a year. CSS can affect people of all ages; however, the average age of diagnosis is between 35 and 50 years.

What are the signs and symptoms of Churg-Strauss syndrome?

Depending on the type of organ affected by CSS, the signs and symptoms may vary from mild to life-threatening complications. The symptoms also vary between three distinct stages of CSS: allergic stage, eosinophilic stage, and vasculitic stage.

In the allergic stage, people with CSS may develop late-onset asthma. The symptoms of CSS become worse for the patients who already have asthma, and some patients also suffer from hay fever that affects the nasal mucus membrane, causing runny nose, sneezing, and itching. In addition, the affected individuals may suffer from facial pain associated with sinusitis.

Vasculitic stage of CSS is marked by the presence of blood vessel inflammation, which causes narrowing of the vessels and restriction of blood flow to different organs. Depending on the organ affected, CSS patients may experience a variety of symptoms. They often suffer from weight loss, fatigue, joint pain, skin rash, coughing, and chest pain. Some people also experience peripheral neuropathy, severe abdominal pain, hematuria, and irregular heartbeat. In the presence of asthma or congestive heart failure, people may also suffer from dyspnea or shortness of breath.

Although exact etiology of CSS is unknown, hyperactive immune system is generally responsible for the disease development. Several genetic or environmental factors (such as allergens or medications) can over-activate the immune system, causing inflammation in healthy organs or tissues. People with a medical history of asthma or allergies are more susceptible to develop CSS.

How is Churg-Strauss syndrome diagnosed?

Since CSS shares symptom-similarity with other diseases, diagnosis is often difficult. According to the American College of Rheumatology, there are 6 criteria to identify CSS: presence of asthma, eosinophil count of more than 10%, mono- or polyneuropathy, pulmonary infiltrates, sinus problems, and extravascular eosinophils. The diagnosis of CSS is generally made if a person presents with four of the aforementioned six criteria.

To further confirm the diagnosis, doctors also ask for blood tests. These tests are usually done to detect the number of eosinophils or the presence of autoantibodies in the blood. In some instances, physicians also recommend imaging tests, such as X-rays, computed tomography (CT) scans, and magnetic resonance imaging (MRI), to identify and analyze abnormalities in the lungs and sinuses.

If blood and imaging tests are suggestive of CSS, doctors ask for a biopsy to confirm the presence of eosinophilic granulomas and/or vasculitis, and such histological evaluation can even reveal eosinophils outside blood vessels.

How is Churg-Strauss syndrome treated?

Till date, there is no cure for CSS; however, doctors often prescribe medicines to reduce the symptom intensity. People who show mild symptoms are generally respond well with corticosteroids. In cases where CSS affects vital organs, doctors prescribe corticosteroids along with other immunosuppressive drugs. Because of adverse side-effects of these drugs, doctors generally reduce the dose once the symptoms are controlled.

Doctors also prescribe immune globulin for patients who do not respond well to other medications; nonetheless, this type of treatment is rather expensive. Finally, CSS patients can be treated with specific monoclonal antibodies that are designed to control immune reactions and reduce eosinophil levels.