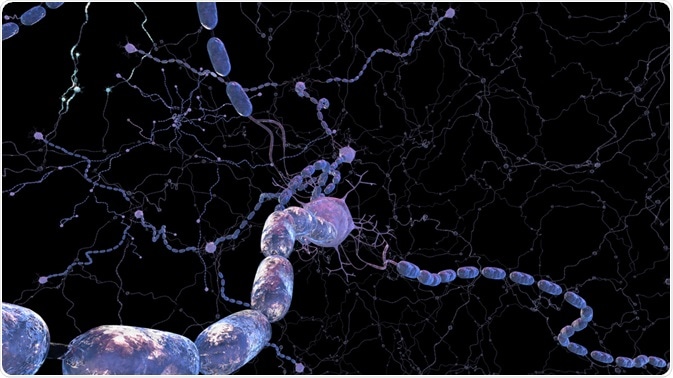 The myelin sheath covers and insulates axons, aiding the conduction of electrical signals between nerves. The process of demyelination disrupts this electrical nerve conduction, which leads to symptoms of neurodegeneration.

Demyelination tends to be patchy and segmented, with various different areas being affected sequentially or simultaneously. Remyelination can also occur, with the neural function being recovered through regeneration and repair. However, extensive loss of myelin generally leads to irreversible degeneration of the axon and cell body.

In the demyelination process, areas of lipid degeneration in the myelin sheath are referred to as neuritic plaques. These may be variable in size. The residual degenerated myelin sheath is removed by macrophages that gather at the affected site along with lymphocytes. As time progresses, the sites of demyelination become gray and hard (sclerotic) as the white matter is destroyed. Eventually, the destruction of the myelin sheath is followed by direct damage to the axon or nerve fiber underneath.

Several conditions lead to demyelination and one of the most well-known neurodegenerative disorders is multiple sclerosis. Here, the immune system targets the myelin sheath or the cells that form and maintain it. This disease is twice as common among women than among men and most people are aged between 15 and 55 years when the condition first presents.

There have been cases of disease onset among individuals older and younger than this, but they are rare. The disease course in multiple sclerosis is usually relapsing and remitting, but it can also be progressive from disease onset or become progressive after periods of remission. The latent phase between initial symptom manifestation and the first relapse event is variable, but it may be a period of many years.

Examples of other demyelinating diseases include the following:

The demyelinating disease usually leads to muscle weakness and stiffness, loss of vision, sensation, and coordination, pain, and altered bowel and bladder function. A more comprehensive list of the symptoms and signs consistent with demyelinating diseases is given below.

Factors that are thought to increase the risk of demyelinating disease include infection, an autoimmune disorder, genetic predisposition, and exposure to toxins. Research has also shown that exposure to weed killers and insecticides containing organophosphates can cause demyelination. In addition, neuroleptic agents used in the treatment of psychosis have been shown to cause demyelination.

There is no cure for demyelinating diseases or to prevent their progression, but early treatment can help to minimize the effects of attacks, manage symptoms and modify the disease course. Depending on the specific disorders a range of therapies are available and may include drugs that can reduce the frequency of new lesions forming. Approaches to managing symptoms include muscle relaxants, physiotherapy, and drugs to alleviate fatigue and pain.