Extracorporeal membrane oxygenation (ECMO) is a method of providing lung and heart support to patients with inadequate blood perfusion in the body, or gas exchange in the lungs. Blood is pumped from the body into an artificial lung, oxygenating red blood cells and removing excess carbon dioxide before it is returned to provide oxygen to the tissues and organs. 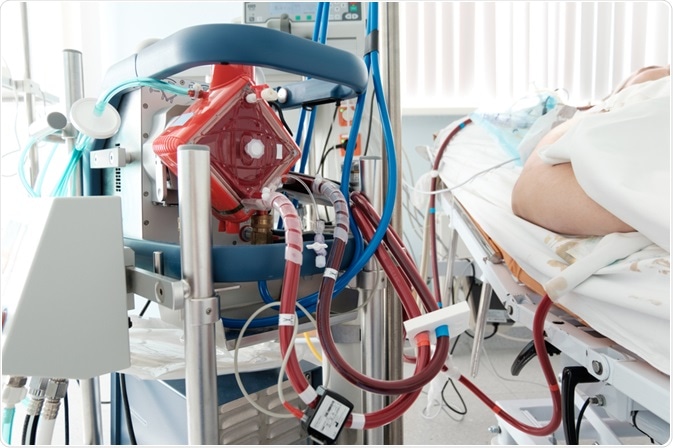 Patients may require ECMO for a variety of reasons, but generally, they will be undergoing severe acute lung or heart failure and have failed to respond to conventional therapy. Guidelines published by the Extracorporeal Life Support Organization suggest that ECMO is only considered when the patient is already predicted to have a 50% mortality risk and is usually indicated at 80%.

Keeping patients on ECMO for long periods of time is very expensive, and only of value if the patient is likely to recover from the experience. Therefore, other factors such as the presence of preexisting conditions, age and size of the patient, and futility of the process are also considered.

The FDA approves the use of ECMO for continuous use up to 6 hours during medical procedures or transport, and for respiratory support for longer periods. Most patients that are recommended for ECMO are in serious cardiogenic shock, which is when the heart cannot pump enough blood to meet the body’s needs, usually following a serious heart attack.

Patients with biventricular heart failure and serious hypoxemia that have failed to improve from other interventions are amongst the next-most considered group for ECMO. Careful patient monitoring is important while on ECMO, as while it can take pressure off the central veins, right atrium, and right ventricle, the left atrium is under increased pressure due to the infusion into the aorta, so patients with poor contractile heart function are under increased danger of developing ischemia-mediated necrosis.

ECMO is only used as a temporary support device for patients either expected to recover naturally, such as those with myocarditis, or patients awaiting transplant or other major intervention. Common complications include systemic inflammatory response syndrome, vascular damage, and stroke, and so alternatives such as ventricular assist devices are always considered. However, only ECMO offers removal of carbon dioxide and oxygenation of the blood, so is necessary in cases requiring lung support.

How does ECMO work? 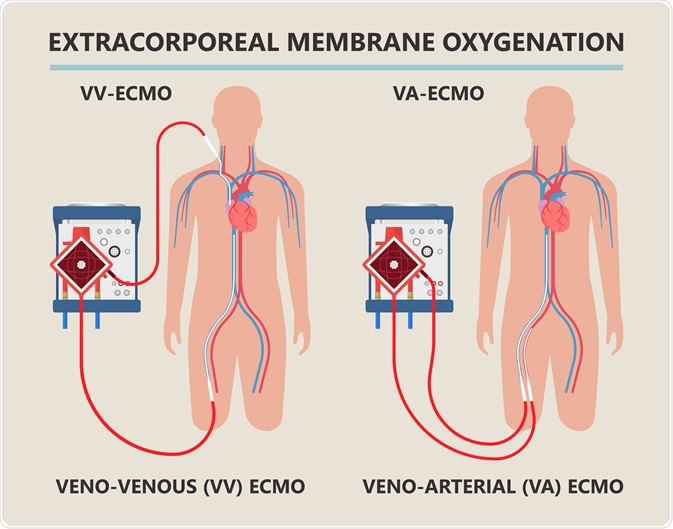 The return cannula is sometimes placed on the subclavian artery to ensure perfusion into the brain, a configuration that also allows patients somewhat improved mobility while on ECMO, while the femoral artery is most often used for convenience of access and speed of implementation. The inflow cannulas usually have end and side holes in case of blockage, and are size 19F to 25F, while arterial cannulas are slightly smaller at 15F to 24F.

The arterial cannula is inserted facing towards the heart, and the blood is actually pumped through the body in the opposite direction to normal, from the iliac or femoral artery back towards the aorta. Due to this, deoxygenated blood coming from the lungs and escaping from the left ventricle can enter into the aorta and prevent the oxygenated blood from the femoral artery reaching the upper body, in cases where the patient’s lungs are also compromised.

Blood leaving the cannula is allowed to pump into the right ventricle from here, passing the lungs and left ventricle into the rest of the body. This is preferred for respiratory support, as it avoids the development of Harlequin syndrome and is less damaging to any arteries.

After cannulation, the pumps are engaged and the rate of blood flow is increased gradually to the highest safe level the patient can tolerate, before being turned back down to the lowest possible level that still meets requirements, usually around 80% arterial saturation.

This is first to determine the maximum possible flow rate, and then the reduction is to not put any undue pressure on the circulatory system. The blood flow rate must not exceed the capacity of the artificial lung to exchange carbon dioxide and oxygen, and checks are performed to ensure that the inflowing oxygen saturation level is above 70%, while the outflow is above 95%.

Carbon dioxide is removed by the sweep gas (oxygen) passing over the lung membrane, and blood CO2 levels are carefully monitored to adjust the flow rate and mixing ratio of the sweep gas, where some carbon dioxide may be added if levels in the blood are too low. Finally, the blood is warmed to body temperature using a water bath, which may be set to just above body temperature (<40⁰C).