The elder tree is considered to be either an overgrown shrub or a small tree that grows well in sunny conditions. Though a native of Europe, Africa, and some regions in Asia, the elder tree is now found all over the United States following its introduction to the continent.

The elder plant Sambucus nigra is valuable for its berries, blue or purple, as well as its wood. The active alkaloids of the Sambucus nigra plant include hydrocyanic acid and sambucine, both of which are associated with inducing nausea. These substances are found in the unripe berries, leaves, bark, and seeds of the elder plant and should therefore never be included in a medicinal preparation. 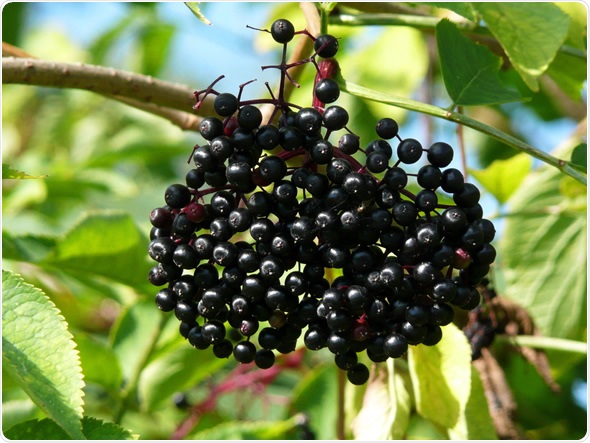 Black elderberry extract has been known to activate the healthy immune system and subsequently increase inflammatory cytokine release, most strikingly of which include tumor necrosis factor-alpha (TNF-α). These cytokines are active against viral antigens, especially influenza, and are also suggested to have anti-cancer actions.

In fact, elderberry extracts have one of the highest percentages of antioxidant flavonoids, such as flavonols and flavones, which helps to prevent oxidative damage to cells within the body, including the DNA. The wide array of polyphenols in elderberry include the aforementioned flavonoids, as well as anthocyanins such as cyanidin, and phenolic compounds. Additionally, ripe elderberries have high vitamin A and C content, as well as large amounts of calcium, iron, phosphorus, vitamin B6, sterols, and certain essential oils.

Elderberries are used in complementary medicine and also as fresh or dried food during both summer and winter months. These berries produce diaphoresis, which helps to break a fever, and can also exert laxative and diuretic actions. Elderberries can also be used to treat various inflammatory conditions, including arthritis and congestion of the upper respiratory system.

In medieval times the elderberry tree had the reputation of being a holy tree because of its medicinal value.  However, Sambucus ebulus, the dwarf elder, may be toxic; therefore, its ingestion should be avoided.

Elderberry flowers can be consumed in several different ways. For example, the flowers can be dipped into flour and eaten as fritters or used to make a tea that can reduce fevers and relieve various inflammatory conditions. Leaf or flower washes help cleanse and soothe skin wounds, as well as heal hematomas or ligament injuries.

Leaves, flowers, bark, or even young branches are made into a paste for use as a poultice mixed with chamomile as a topical treatment to inflamed or sore areas, including bee stings. Elderberries may also be juiced for use in treating burns, while oral use leads to strong laxative action.

Elderberry is used in complementary medicine as a topical wound preparation, for oral use in colds and the flu, and in various proprietary preparations. Available research indicates that these elderberry preparations can potentially shorten the duration of flu and reduce the symptoms of congestion in colds. However, how much of this effect is due to the elderberry extract itself is unknown, as these preparations contain other herbs and even vitamins in addition.

Some potentially harmful interactions that can arise after an individual consumes an elderberry preparation include: