Elephantiasis refers to a parasitic infection that causes extreme swelling in the arms and legs.

The disease is caused by the filarial worm, which is transmitted form human to human via the female mosquito when it takes a blood meal. The parasite grows into an adult worm that lives in the lymphatic system of humans. 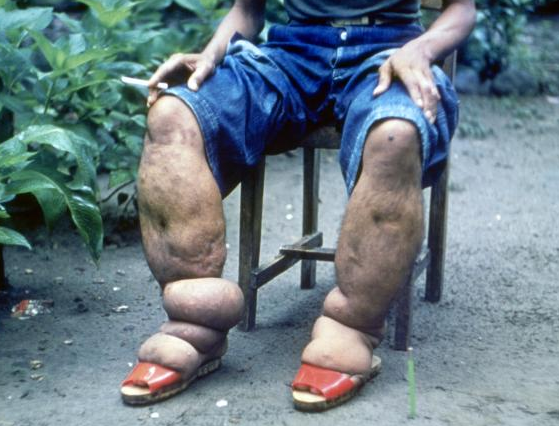 Elephantiasis is typically characterized by a thickening of the skin and subcutaneous tissue that gives rise to the grossly enlarged and swollen limbs that earn the condition its name. The condition is also called lymphatic filariasis.

Epidemiology or prevalence of the condition

The condition currently affects over 120 million people, with 40 million affected by a severe form of the disease. Elephantiasis is most common among populations from India; an Indian person is affected in one third of all cases. Another third of cases involve people from Africa and the remainder are from South Asia, the Americas and the Pacific. The infection is most well known in tropical and subtropical regions.

Examples of nematode parasites that cause lymphatic filariasis includes Wuchereria bancrofti, Brugia malayi, and Brugia timori. The larvae (microfilariae) of the parasite are taken up by the mosquito when it feeds. When the larvae reach the third stage of development, they are introduced to a new host, who then develops the infection.

The standard test for detecting the infection is microscopic examination of a blood smear for presence of the microfilariae. The blood should be sampled at night because the microfilariae circulate via the blood nocturnally.

The main medication used to treat this condition is diethylcarbamazine or DEC, which kills the microfilariae as well as some adult worms. The medication is usually well tolerated but side effects include dizziness, fever and aching muscles.