Epididymitis is a health condition involving inflammation of the epididymis, the tube that stores and transports sperm in the back of the testicles. Men of any age can be affected by the condition, but it is most common in young men aged between 19 and 35 years and frequently causes hospitalization in the military. 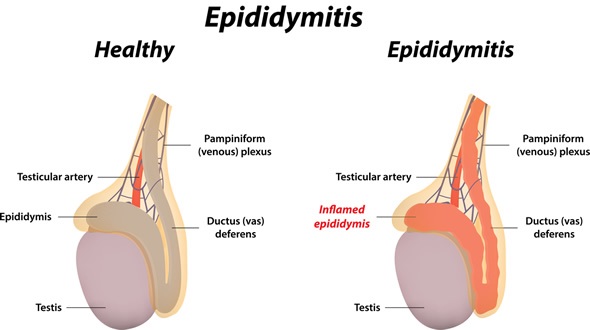 Approximately 1 in 1000 men is affected by epididymitis each year, making the condition the most common cause of scrotal inflammation. It is among the top five most diagnosed urologic condition for men aged between 18 and 50 years.

Acute epididymitis usually occurs in young men aged between 19 and 35 years but may affect men of any age. Chronic epididymitis is often under-diagnosed for several years, and the average age of presentation is approximately 50 years. Epididymitis is uncommon in children, although it can occur.

There are various possible causes of epididymitis, including:

STIs are the most common cause, particularly in young men between the age of 19 and 35 that have engaged with multiple sexual partners without using condoms.

The symptoms of epididymitis tend to present gradually and worsen over time if left untreated. The symptoms may include:

When a patient presents with symptoms that may be indicative of epididymitis, the first step in diagnosing the condition is to conduct a physical exam to check for signs and symptoms, such as inflammation of the testicles or lymph node enlargement. This may also include a rectal examination to check for prostate enlargement.

There are a number of other tests that may then be conducted, including:

It is important to distinguish epididymitis from other similar health conditions such as testicular torsion in the diagnostic process. Testicular torsion usually presents more suddenly and is associated with severe consequences if not treated immediately.

The treatment of epididymitis is based on the resolution of the underlying infection, which leads to an improvement in symptoms.

A course of antibiotics is usually recommended, in addition to analgesic and anti-inflammatory medication to ease the immediate symptoms. Other techniques to relieve the pain include cold therapy and elevation of the scrotum. Additionally, it is important that patients rest and allow their bodies to fully recover. Abstaining from sexual intercourse is recommended during treatment to prevent a recurrence of the infection.

With appropriate treatment, the pain associated with epididymitis usually improves within 1-3 days. However, some symptoms may take several months to resolve.

In some cases, further treatment techniques are required. This may include draining of pus with a needle if an abscess forms or surgical procedures in severe cases.