Hip impingement or femoroacetabular impingement (FAI) of the hip is a condition in which the components of the hip joint collide at non-articular parts during the hip’s passage through the normal range of motion, making anterior flexion and internal rotation of the hip beyond 90 degrees uncomfortable or impossible.

It may result in damage and tears of the labral cartilage, wearing down of femoral head articular cartilage with osteoarthritis, and hip pain during certain activities involving hip flexion. 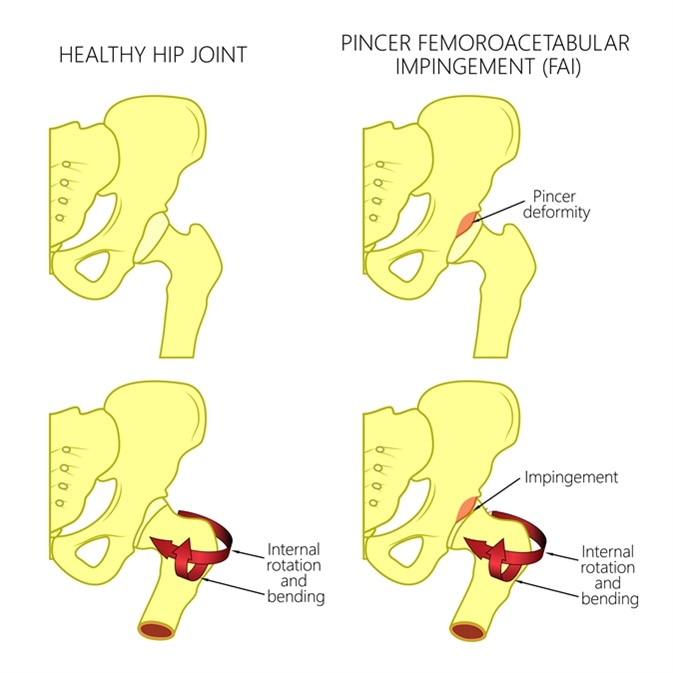 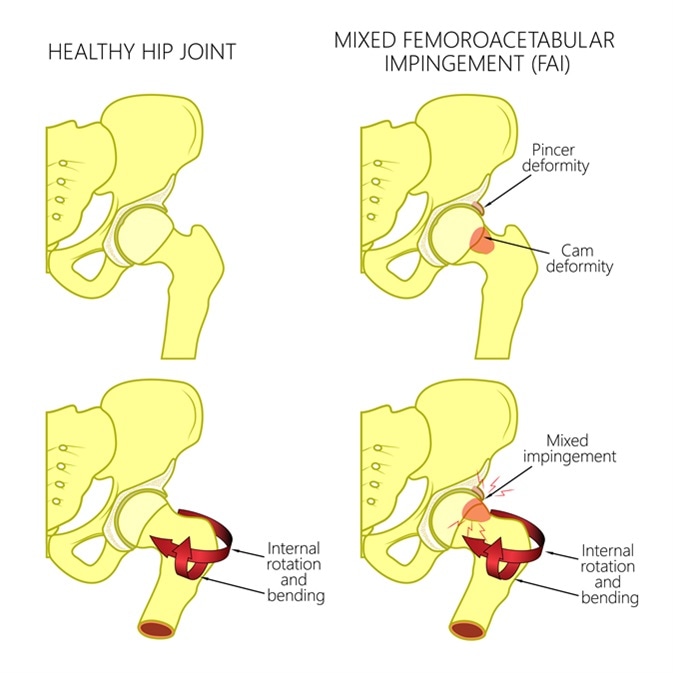 Illustration of a healthy human hip joint and a hip with mixed femoroacetabular impingement. Front view of hip joint with section of the pelvis. For advertising and medical publications. Image Credit: Aksanaku / Shutterstock

In many patients with FAI non-surgical management is attempted first. This includes limiting physical activity for a period, with pain relievers and anti-inflammatory medications such as non-steroidal anti-inflammatory drugs (NSAIDs) to control pain.

This is usually effective with respect to alleviating symptoms and producing functional improvement, when the alpha angle is below 60 degrees at the outset. However, there is no gain in the range of motion. Long-term data on symptom control is also not available.

A significant drawback with this approach is the difficulty in imposing limitations on activity to any extent in the adolescent and early adult age group, which are marked by high levels of sporting activity.

For this reason a closer follow-up is mandatory to detect early signs of progression, which could leave the patient with permanent damage to the labrum and increase the risk of early osteoarthritis.

Patients with complex and severe deformities of the hip joint, or with significant symptoms, are unlikely to improve with conservative management. The principle of surgical management is to gain entry to the hip joint.

This enables the operator to assess the shape of the joint, and decide on the technique to be used to produce a joint which will not result in impingement. Lateral ligamentous structures are repaired as needed.

An open surgery procedure is the gold standard. Introduced in 2001, it best allows direct and complete visualization of the joint and the proximal femur as well as the full range of motion of the joint.

This enables the surgeon to perform corrective debridement of the femoral head and neck structures, also called an osteoplasty, combined with resection of the rim of the acetabulum as required to match the debrided head and neck, and reattachment of the rim labral cartilage.

This not only relieves pain but also frees up the joint, prevents further collision between the head of the femur and the socket. Other procedures that may also be employed include:

The outcomes are generally good with this approach in older patients. It is thought that a younger population might benefit even more because they have a lesser degree of cartilage damage, and a lower risk of joint space narrowing.

Arthroscopic surgery is less invasive and therefore has advantages such as a faster recovery time, a lower incidence of complications, earlier return to active life, not having to undergo complete hip dislocation, and a lesser incidence of hemorrhage during the procedure.

Combined approaches use a smaller incision and may employ arthroscopic techniques as well, to avoid having to perform complete dislocation of the hip or intertrochanteric osteotomy.

The arthroscopic technicque helps to visualize the anterior surface of the joint and all damage to the cartilage, while the open approach exposes the area for debridement without the potential for residual material to be entrapped in the joint leading to failure of the operation.

The choice of procedure depends more upon the experience level of the surgeon and ease with the technique.

More complex repairs may be better done through an open approach which permits multiple procedures to be performed simultaneously and thus achieve a stable hip joint without impingement.