Nails are unique structures formed of keratin, just like hair and the superficial skin layers. Nail diseases vary in etiology and morphology. The most common types are presented here. 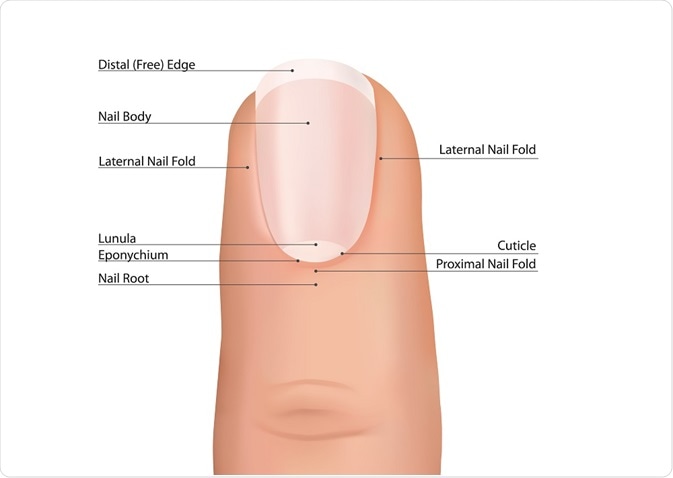 Fingernails protect the sensitive tips of the fingers from accidental trauma and are formed by the layer of germinal tissue called the nail matrix.

The matrix can be found at the very base of the nail, hidden under the skin fold which lies just below the proximal side of the nail. The nail matrix is part of the nail bed which supports and nourishes the nail plate.

The nail folds hold the nail in position and anchor it to the skin, forming the cuticle. This prevents microbial organisms from entering the nail bed and also keeps moisture out.

The normal nail is pale pink in color. The end of the nail that grows off the finger is white because it has no connection with the vascular nail bed which supports the rest of the nail plate. Nails can become discolored because of:

This is a condition caused by bacterial infection of the nail fold. It is more common in those who always have their hands in contact with moisture, who bite their nails or incorrectly manicure their nails, or are prone to eczematous conditions or small injuries of the fingers.

Here the nail fold is thickened, tender and mildly reddened. It is due to a mix of factors such as chemical irritation, allergy and moist conditions, all of which predispose to chronic fungal infection as well. The nail becomes distorted in many such cases with accompanying discoloration.

Traumatic changes to the nail

The nail may become injured, leading to:

Elevation of the nail plate (onycholysis)

The nail can be lifted off the underlying nail plate by infection or trauma and appears yellowish or white. This includes:

This condition is characterized by nails growing into the skin at the sides of the nail. This causes pain and may predispose to infection. It is more common if the nail curves inwards too sharply, or if the nails are not trimmed correctly (straight across, or, in the case of fingernails, with a gentle curve). Trauma or tight footwear may also cause this condition.

Thickening of the toenails is a normal age-related change, but abnormal thickening is also possible. This includes:

Longitudinal ridges running down the nail may occur in several systemic conditions, such as:

The nail may flake into layers as it grows, due to:

The nail may be deformed if it is subject to trauma or fungal infection. The nail bed injury forces the nail to grow in an abnormal way. Other abnormalities of nail shape include:

Allergic or autoimmune conditions may present with nail changes such as pitting in psoriasis or splinter hemorrhages in bacterial endocarditis, or altered shapes, including the koilonychia (spoon-shaped concave nails) of iron-deficiency anemia. Beau’s lines are transverse depressions that occur following severe illness, malnutrition, chemotherapy or nail injury, besides several other conditions. Clubbing may occur in lung disease.