The retina is the layer of the eye that contains light-sensitive nerve cells or photoreceptors. It receives and transmits light stimuli to the brain, enabling the body to see. It lines the inside of the eye, resting upon a pigmented layer called the retinal pigment epithelium (RPE). This nourishes and renews the retinal photopigments, maintaining normal visual function.

When the retina pulls away from the underlying RPE it is called a retinal detachment. 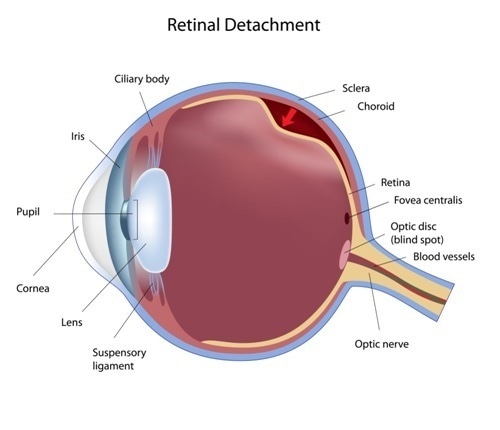 There are three types of retinal detachment, as described below:

Rhegmatogenous retinal detachment: This is caused by a tear or hole in the retina which allows fluid from the vitreous chamber to seep underneath the retinal layers and separate it or peel it off the RPE. This is the most common type.

Tractional retinal detachment: In this case the scar tissue on the retinal surface contracts, pulling against the RPE and creating retinal detachment. This is more often seen in diabetics, those with a history of prior retinal surgery, and inflammatory conditions which result in scarring.

Serous/exudative retinal detachment: This is caused by exudation of fluid under the intact retina, causing its detachment from the RPE. This is seen in inflammatory or traumatic conditions, which increase the rate of fluid formation.

People who are at increased risk for this condition include those who:

Retinal detachment may be sudden or subacute. In either case, an increase in the number of floaters, and the appearance of light flashes in the peripheral visual fields, may occur. Floaters are dark specks which dart about in the field of vision following the direction of eye movement. They are shadows cast by the clumps of solid material in the vitreous. Light flashes are considered a more ominous symptom. Also called photopsia, they occur because the traction stimulates the nerve fibers leading from the sensory cells in the retina. They may mark a higher probability of serious central vision loss. A third symptom is the descent of a dark curtain over the field of vision. The appearance of such symptoms is an indication for an emergency eye examination by an ocular specialist.

How retinal tears are associated with retinal detachment

Retinal tears are associated with:

When the retina tears, a hole is formed in it. Fluid from the eye leaks through the hole to the potential space between the RPE and the photoreceptor cell layer lying above it. As these layers separate, the retina peels off and is cut off from the nourishing RPE blood vessels. If this goes on too long, the nerve cells die.