Ileus is a term used to describe the functional and non-mechanical inhibition of propulsive bowel activity, regardless of the pathologic mechanism. Ileus should be differentiated from a mechanical bowel obstruction, which is when GI motility is inhibited due to different structural abnormalities like tumors, hernias, intestinal adhesions, and twisting of the intestine. 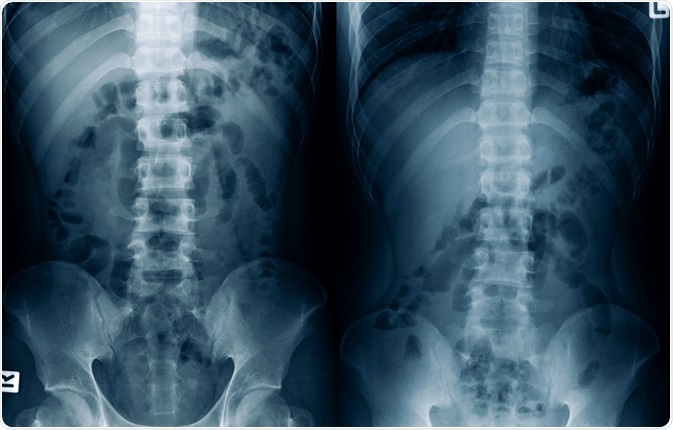 The incidence of postoperative ileus is greatest after bowel surgery (20%), but it can also occur after cholecystectomy (8.5%), appendectomy (6%), and hysterectomy (4%).  The overall incidence of ileus for all operative procedures in the abdomen is approximately 8.5%.

After a major abdominal surgery, the return of the motility is typically first observed in the small bowel in less than 24 hours, then in the stomach between 24 and 48 hours, and finally in the large bowel after more than 48 hours (most often after three days). Nevertheless, recovery of large bowel function is much less predictable when compared to other parts of the GI tract; therefore, clinicians use endpoints such as the passage of stool and flatus as indicators of clinical resolution of ileus.

Ileus can be observed in all parts of the GI tract, from the stomach to the terminal colon. Principal mediators in the etiology of postoperative ileus are inflammatory cell activation, agonism at opioid receptors in the gut, autonomic dysfunction, and modulation of GI hormone activity. The common pathway for these effectors is impaired motility and contractility, coupled with gut wall edema.

Perioperative electrolyte disturbances could also have a pivotal role in the etiology of an ileus. Well-described effects of electrolyte variations on gut motility support this hypothesis, and it has been demonstrated that such disturbances are often visible during an episode of prolonged postoperative ileus. Among them, hyponatremia could be a significant correlate for prolonged ileus.

A distinction between postoperative ileus and mechanical small-bowel obstruction is sometimes difficult and confusing. A useful tool for distinguishing these two entities is computerized tomography (CT), although even plain radiography can help establish a correct diagnosis in certain cases.

Paralytic ileus is a form of postoperative ileus that lasts longer than five days after surgery. It represents a common side-effect of certain types of surgical interventions. The condition is also termed pseudo-obstruction and is one of the major causes of bowel obstruction in infants and children.

Still, not all causes of paralytic ileus are surgical in nature. Moreover, paralytic ileus may also be due to gastroenteritis caused by bacteria or viruses, electrolyte disbalance, mesenteric ischemia, which is a decreased blood supply to the intestines, kidney or lung disease, as well as the use of narcotics.

Other types of ileus

Other types of ileus also exist, namely meconium and gallstone ileus; however, these types of ileus are considered misnomers due to the mechanical obstruction in their pathogenesis.

Gallstone ileus is characterized by occlusion of the intestinal lumen as a result of one or more gallstones, whereas meconium ileus represents the obstruction of the terminal ileum by the abnormally tenacious stool of a newborn baby.