Impetigo is a very contagious bacterial skin infection that causes skin sores. This condition is mostly due to staphylococci but is also caused by streptococci, both of which enter the host through a break in the skin. The skin may be broken by a scratch, cut, or by allergic ulcers, sores, or infestations. 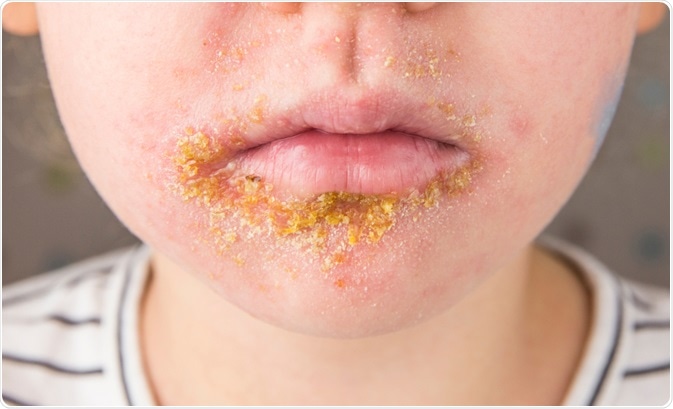 Impetigo is most often seen in young children, between the ages of 2 and 6 years. The first sign of impetigo occurs 4 to 10 days after infection, although it can spread from one person to another before that.

Patients with impetigo often exhibit a small red sore, like a pimple, most commonly on the face, arms, or legs. These sores eventually become purulent, and then ooze pus, usually within a few days, which covers them with thick yellow crust. As the crust contracts, the skin itches, leading to the spread of the bacteria as a result of scratching.

Impetigo sores will typically heal within a week of the start of treatment, without complications. The healing sores leave behind light reddish scars, which gradually fade with time.

If there is any sign of deeper infection, it is imperative that patients consult with their doctors right away. Impetigo in newborns can be dangerous and, therefore, requires prompt antibiotic treatment.

Bullous impetigo is most commonly seen in babies. This form of the condition erupts as fluid-filled blisters that are commonly seen on the trunk, which break open quickly and subsequently appear as a yellowish crust.

Non-bullous impetigo comprises about 70% of all cases of impetigo. This form of the condition occurs mostly around the nose and mouth, as sores quickly crust over to a dirty yellow color.

The diagnosis of impetigo is typically made in a hospital setting by clinicians. Typically, the treatment of impetigo will require the prescription of antibiotic pills or creams.

Impetigo sores should be washed twice a day. An airtight dressing should be applied if the child goes out to prevent the spread of infection. After about 48 hours of treatment, the sores are usually non-infective and the bacteria are unlikely to spread. Dried-up sores are also non-contagious.

Transmission of the infection occurs by:

It is recommended that children with impetigo are kept away from their nursery or playgroup for at least a couple of days until their treatment regimen has been completed. Clinicians are urged to encourage all patients, particularly those with impetigo, to wash their hands frequently and use their own towels. Caregivers should also wash their hands whenever they touch the skin of an individual who has impetigo.