What is Legionnaires’ Disease?

Legionnaires’ disease is a microbial infection of the lungs that can be potentially life threatening. It is caused by the legionella bacteria.

When was Legionnaires’ disease discovered?

Legionnaires’ disease was first identified in 1976 after a mass outbreak at a hotel hosting a convention to commemorate the American 200th anniversary of independence at a veteran organisation known as the American Legion. The causative organism was Legionella pneumophila.

Legionellosis is a term that includes pneumonia like in Legionnaires’ disease as well as similar but less serious conditions of Pontiac fever and Lochgoilhead fever. (1-7) 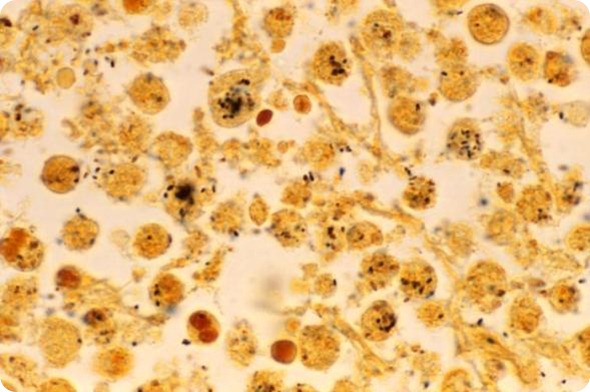 This micrograph depicted cytoarchitectural details seen in a lung tissue specimen from a Knoxville patient with fatal pneumonia due to Legionnaires’ disease. The tissue was stained using Dieterle’s silver stain, which employs a silver-impregnation staining technique, the results of which reveals the presence of Legionella pneumophila bacteria. Image Credit: CDC

Who does Legionnaires’ disease affect?

Legionnaire’s outbreaks are commonly seen after the affected person has been travelling.

The actual number of cases is difficult to detect since all persons with Legionella pneumonia may not have the relevant test for Legionnaire’s disease, especially if they have mild symptoms.

Legionnaires’ disease is two to five times more common in men than women. The disease commonly affects persons aged 50 and above.

Nearly 40 to 50% of all cases are related to travel, usually abroad. Cases are commonly detected between June and September.

Who is most at risk of Legionnaires’ disease?

Those at risk include:

How is Legionnaires’ disease spread?

The bacteria spread via air. They are present in small water droplets that are contaminated with the bacteria.

Legionella bacteria are commonly found in sources of water, such as rivers and lakes. From these they may enter the artificial water supply systems in the air conditioning, hot and cold water services and cooling towers.

Buildings with centralized air conditioning systems particularly large ones like hospitals, hotels, offices, shopping malls etc. may be more prone to legionella contamination because of the complexity of their water systems.

Most cases are caused by L. pneumophila, however, there may be other causative species of the organism that may lead to milder disease conditions.

Other than L. pneumophila, 34 species of legionella have been identified. The bacterial species are found in natural water supplies and soil.

The symptoms of Legionnaires’ disease include severe muscle pain and high fever. The bacteria may infect the lungs leading to pneumonia. This manifests sometimes as a persistent cough.

Treatment should be immediate and with appropriate antibiotics. Some cases may become severe, especially in the vulnerable populations such as sick elderly individuals.

Around 10 to 15% of those getting the infection succumb to it. Death rates rise in patients with pre-existing health conditions like a weak immune system.

For prevention of Legionella bacteria from growing and causing disease, water works are guided by regulations and there are guidelines for maintenance and control of water supply systems. They have to keeping the water cooled below 20ºC or heated above 60ºC (below 68ºF or above 140ºF) to prevent the bacteria from growing.

Legionella can survive in low temperatures, but thrive at temperatures between 20ºC and 45ºC.

Other potential sources of legionella include spa and whirlpool baths, humidiﬁers and ﬁre-ﬁghting systems. These also need thorough and regular examination.