What is BPPV? Guide to Symptoms, Diagnosis and Treatment.

BPPV is a disorder affecting the inner ear, where displaced calcium carbonate crystals produce sensations of vertigo and dizziness. These brief episodes of room spinning disorientation are brought on with specific head movements and positions. This condition is generally not considered serious and the majority are effectively treated with vestibular exercises involving head manoeuvres.

What Does BPPV Stand For?

BPPV is the short form for Benign Paroxysmal Positional Vertigo

Benign = not serious, or life threateningParoxysmal = occurs suddenly or periodicallyPositional = brought on by changes in head positionVertigo = room or body spinning sensation

What Happens with BPPV?

Each inner ear contains a structure that detects head motion and position called the vestibular organ or apparatus. 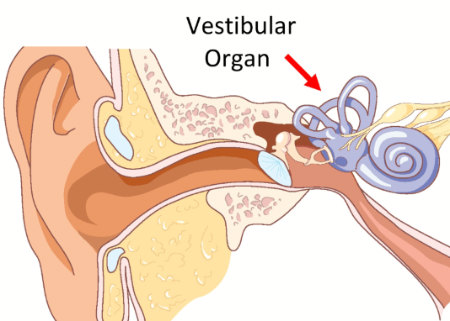 This organ contains 5 sensors;  one each located in the 3 semicircular canals and one in each of the 2 otolith organs. The otolith organs (the utricle and saccule) have calcium carbonate crystals attached to them, which helps your inner ear be more sensitive to head position and motion. 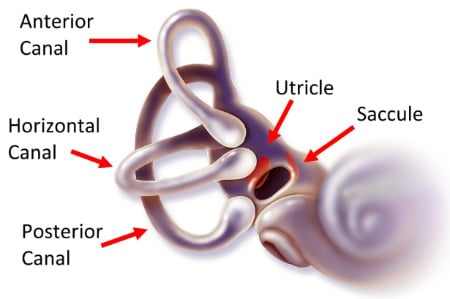 BPPV occurs when crystals from your otolith organs break free and wander into the semicircular canals. These heavy calcium carbonate crystals disrupt fluid movement inside the canals which triggers irregular sensations of motion. We feel this as vertigo, or the feeling that you’re spinning or that the room is spinning.

Those who suffer from BPPV display rapid eye movements called nystagmus. Normally your eyes quickly readjust their position as your head moves, which allows you to keep your vision in focus. However with BPPV, the movement of the crystals within the semicircular canal, tricks your brain into believing that your head is moving irregularly. And in response, your eyes rapidly alternate their position, or “beat” back and forth. This eye movement is fairly dramatic and quite visible to those watching the patient.

Risk Factors or Causes of BPPV

In about 50% of cases, BPPV is due to an unknown cause (i.e. idiopathic). However, research shows that the following factors make you more susceptible to BPPV:

BPPV can potentially occur at any age, however it is not commonly seen in those under 30 years of age. The chances of getting BPPV increase as you get older. For those above 70 years of age, it is one of the more common causes of dizziness

Women are 3x more likely to get BPPV then men.

BPPV can increase with vitamin B deficiency, a clinical diagnosis of anxiety, a history of migraines, diabetes, low bone density (osteoporosis) and poor cardiovascular health.

Can stress cause BPPV?

Stress, anxiety, and depression by themselves are not known to be common causes of BPPV. However there is some indication that these types of psychological conditions can:

1)  lead to a slight increase in your risk of getting BPPV2)  can amplify the symptoms of BPPV3)  can cause BPPV to take longer to resolve4)  can result in long term residual dizziness even after the BPPV has gone away.

If anxiety, depression, or excessive stress is present, it is advised that you speak with your doctor to help reduce their impact on your dizziness.

How is BPPV Diagnosed?

Dizziness and vertigo are complex complaints that can be difficult to accurately diagnose. They are symptoms that can be associated with many different problems in your body such as a stroke, cancer, central neurological conditions, hormonal issues, cardiovascular pathologies etc. Even in cases where the issue is successfully narrowed down to a problem with the inner ear, there are many different types of vestibular disorders that can be the cause of vertigo.

A proper diagnosis of BPPV is arrived at by:

1.   a careful review of the history (onset, symptoms, patterns)2.  the ruling out of other potential causes3.  positional tests that correlate head position to nystagmus to symptoms

If your symptoms do not match these noted above, then it is less likely that your condition is BPPV.

2.  Ruling out other causes of dizziness and vertigo

As mentioned earlier, dizziness can come from a variety of other causes; many that have nothing to do with your inner ear. Here is a list of 10 common causes of dizziness: https://cornerstonephysio.com/resources/10-common-causes-of-dizziness/

The test position that produces the vertigo is matched to the specific pattern of eye movement (nystagmus) that is recorded.

Once the information from these 3 areas are reviewed, a diagnosis of BPPV can be given.

There are 2 types of crystal displacement in each of the 3 semicircular canals. If we consider both the right and left ears, we can potentially have 12 different types of BPPV diagnoses. It is important to understand which specific type of BPPV exists, to improve the likelihood of a successful treatment manoeuvre.

Additional Tips For Assessment of BPPV

Infrared Goggle TestingSome dizziness clinics now use infrared goggle technology to examine the nystagmus patterns that occur with BPPV. This results in better screening to rule out other conditions that can mimic BPPV as well as providing more accuracy in diagnosing the specific type of BPPV that is present. Ultimately, this means that successful treatment is achieved more quickly and with less aggravation of your vertigo symptoms.

MRI and CT ScansHead scans such as MRIs and CT scans are not helpful in diagnosing BPPV. They should only be used if your practitioner notes that you have signs of central neurological issues.

What Are Effective Treatments for BPPV?

The primary treatments for BPPV are applied through a series of head movements called Canalith Repositioning Manoeuvres (CRMs). The purpose of these manoeuvres is to move the otolith crystals out of the semicircular canals and back into the saccule/utricle area of the inner ear.

An accurate assessment of the type of BPPV you have, will provide you with the following information:

1)  which side is the affected ear2)  which semicircular canal contained the dislodged crystals3)  are the crystals free floating in the canal? Or are they adhered to the sticky part of the base of the canal?

This is the information required, in order to select the appropriate type of CRM for BPPV treatment.

The following are the most commonly used manoeuvres for the treatment of BPPV:

WARNING:  In some cases, the application of the incorrect manoeuvre or a poorly performed manoeuvre can turn a simple BPPV into a complex one. This can occur by crystals moving from one canal into multiple canals. Or crystals can migrate deeper into the affected canal and attach to the sticky Cupula located at the end of the canals.

If you are not sure how to proceed, contact an experienced vestibular physiotherapist to help you apply the manoeuvres properly.

Over 90% of BPPVs are fully better after one manoeuvre. By the 3rd manoeuvre, over 99% of BPPVs are resolved. If more than 3 manoeuvres are not curing your BPPV, then some factors to consider are:

In some cases, a successfully treated BPPV can still result in lingering symptoms of generalized dizziness, lightheadedness, and motion sensitivity. This can happen for two reasons.

First, BPPV can cause our heads to become hyper-sensitive to the positions or movements that produce the vertigo. Then after the BPPV and vertigo is resolved, the hypersensitivity remains. This should be assessed by a vestibular physiotherapist and exercises given to reduce the sensitivity.

The following are not recognized as appropriate treatments for BPPV.

BPPV is a mechanical disorder, therefore medications such as Serc (Betahistine), Meclizine, Dramamine have no affect on changing the mechanics of the vestibular organ. Supplements similarly have no evidence of benefit.

In some cases, simply waiting can reduce or eliminate the symptoms of BPPV. This occurs if the crystals are smaller than usual and can be resorbed by your body. However, it is common for vestibular therapists to assess patients who have had BPPV for months to years. We do not recommend “waiting out” your BPPV, as it is a easy condition to quickly treat.

It is instinctual for BPPV sufferers to avoid movements that trigger their symptoms, however, this is not advised. Avoiding vertigo has no affect on the mechanics of the root condition of BPPV. In fact, it can actually make you more sensitive to certain movements over time, increasing your chances of getting chronic dizziness.

Can BPPV Reoccur? Will My BPPV Come Back?

Once you’ve had BPPV, you do have a higher chance of it occurring again.

These odds increase if your BPPV was caused by a concussion or whiplash.

How Can I Prevent BPPV From Reoccurring?

Ultimately, it is difficult to predict or stop BPPV episodes from reoccurring. Many cases of BPPV are idiopathic, therefore do not have identifying factors that we can address. However, in certain cases, these tips may help:

If you have a Vitamin D deficiency, promising research shows that supplementation can significantly reduce the chances of getting BPPV again. Note, those with already normal Vitamin D levels won’t see the benefits of supplementation.

The calcium carbonate crystals in your inner ear are susceptible to breaking/fracturing with osteoporosis, the same way that bones in your body are at risk. Identifying and treating this condition can potentially help reduce BPPV frequency.

BPPV on the Same Side Again

BPPV more often affects the same ear than not. If you repeatedly experience BPPV on the same side, you may find that by avoiding sleeping on that side can reduce the odds of reoccurrence. If this is not possible because you roll while sleeping, you may wish to elevate the angle of your bed by placing blocks under the bed posts on the head side of your bed.

In a rare percentage of cases, BPPV can be so frequent and debilitating that surgery becomes the most appropriate option. In these cases, plugs are inserted into the affected semicircular canal(s), which stops the movement of fluid within them. However, this is an invasive procedure and is considered last-resort.

Can BPPV Cause Tinnitus?

BPPV itself does not cause tinnitus. This is a common question as the vestibular organ is attached to the cochlea (hearing organ), therefore it makes sense that some conditions of the inner ear can affect both hearing and balance. However BPPV is a mechanical disorder that only affects the canal(s) that the crystals are found within. Therefore only head movements are impaired, and hearing is left intact.

Tinnitus can occur with some vestibular pathologies, such as vestibular labyrinthitis and Meniere’s disease. These dysfunctions can also cause BPPV, therefore in these cases you may have tinnitus and BPPV occurring at the same time.

Is There BPPV Treatment Near Me?

The good news is that training in vestibular rehabilitation has expanded significantly in the past decade. Most communities will have at least one centre with a Dizziness Clinic that can quite easily treat BPPV and other vestibular conditions. Read the clinic’s reviews, look at the vestibular physiotherapists’ biographies and ask lots of questions about their experience in this field. Find out if they use Infrared Goggle Technology to perform their assessments.